The Chaos of War (Silver Snow)

The Chaos of War 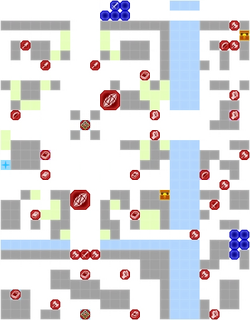 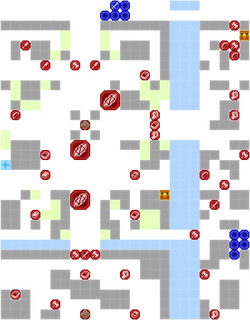 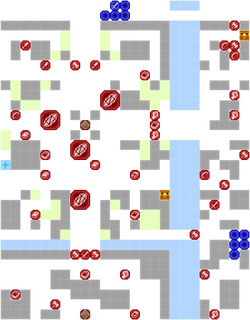 Chapter script
[view]
“The resistance army successfully takes Fort Merceus. Their victory celebrations are cut short, however, when javelins of light pierce the sky and destroy much of the fort. With nowhere else to go, the resistance army withdraws to Garreg Mach. Under the guise of surrender, they secretly prepare for a surprise attack on the Imperial capital.”

After spending the month preparing, the Resistance army finally begins a direct siege of Enbarr. Edelgard sends Hubert and the Death Knight to defend the city streets, but Byleth and their companions emerge victorious and both are slain. After the battle, Seteth and Byleth prepare for the final assault on the Imperial palace. Dedue approaches them and gives them intel regarding the interior layout of the palace; he does not directly join the Resistance army, intent on killing Edelgard by himself in order to avenge Dimitri and his loved ones.

On this map, your units are split in 2 group. With enemy reinforcements spawning from both the North and the South; and the east side of the map holding both 2 ballistas and 2 chests, it is probably best to regroup and take out the east side of the map first.
Dealing with the Eastern side of the map and the Reinforcements of turn 3 and 6 charging you, should keep you more than busy for the first 7-8 turns of the map. Once you have dealt with all of this however, you can continue to the centern part of the map, where the Dead Knight is waiting, but he can, as usual, easily be dealth with, with Lysithea with Dark Spites T (or another Black magic user). THe enemy reinforcements spawn from the West side of the map, so be carefull when advancing as to not get caught by the enemy reinforcements. Once the Central part of the map has been cleared, it is time to face Hubert and the last few of the enemies. On Maddening, Hubert has a whopping 75 attack stat with Agnea's Arrow or 71 with Bolting. It is therefore best to first use a unit with either high Resistance or high Avoid, to absorb Huberts Bolting, a unit with Ward (Manuela or Anna) would come in pretty handy here. As Hubert is one of the few bossess without the Distant Counter ability, so he is unable to counterattack anyhting with 3+ range. Gambits are also a viable option, although he does have 36 Charm, which might make it a bit hard to land one.