The Chaos of War (Verdant Wind)

The Chaos of War 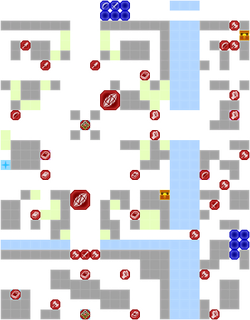 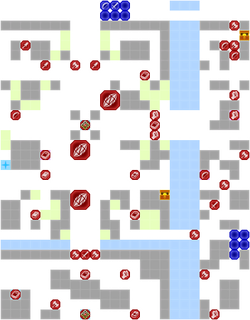 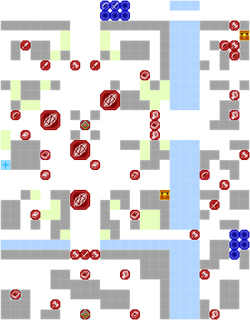 Chapter script
[view]
“It's not just big. This city was designed to protect the castle where the emperor lives. It's as though the city itself is a massive stronghold.”
—Judith

The Chaos of War is the seventh chapter of the Verdant Wind route in Fire Emblem: Three Houses.

Having arrived at Enbarr, Byleth, Claude and the Golden Deer are met with the Imperial army led by Hubert and the Death Knight.

Reinforcements arrive on turns 1, 3 and 6. They are as follows:

There are a large number of enemies on this map. As the victory conditions are to defeat the enemy, only Hubert and the Death Knight need to be taken down to win the battle. Player units are split across two sections: the south and the north-west. This allows you to move in on the Death Knight in a pincer movement, but if you have Lysithea placed in the south she can very quickly move forward and take out the Death Knight in one hit. The Flying Beasts in this level can do significant damage to weaker units, so unless you need their Umbral Steel it is a good idea to steer clear of them. Hubert can attack from a significant distance, so if you want to deal with him quickly make sure you have mounted units to approach him.
It is also worth noting that on the western portion of the map is the Mittelfrank Opera House. If Dorothea or Manuela is fielded onto the map and ends their turn on the Mage artillery tile, a short dialogue will happen where they reminice a bit of their past there. If this dialogue occurs, at the end of the battle, the Opera Co. Volunteers battallion is unlocked. This is one of three chapters in all four routes in which this Battalion can be acquired and the only one in the Verdant Wind path.