The Child of Light

The Child of Light 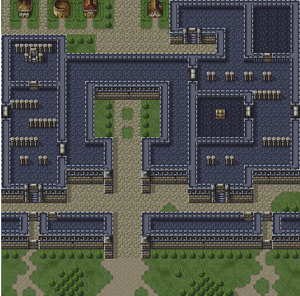 Defend for 15 turns and Defeat Boss

Chapter script
[view]
“...Half a year has passed. The army of House Friege, led by Barat, has waged a relentless onslaught against Leonster, seeking to recapture the castle. Leif's Liberation Army has fought well, but has been gradually worn down and forced into a small corner of the castle—with no way out. Everyone could see it was only a matter of time until Castle Leonster fell...”
—Opening Narration

The Child of Light is Chapter 20 of Fire Emblem: Thracia 776.

Once again, the placement of your units will have a massive impact on how you can deal with this chapter. They will start scattered all over the map within the castle walls with most isolated from the outside by locked doors. As such it is very helpful to bring Door Keys for the units that get stuck in particularly closed off areas. It is not necessary, however, as there are cracked walls that can be destroyed by enemies and Bishops with Unlock staves that can also free them. Be careful of the Armor Knights already in the castle; one of the Bishops will likely use an Unlock staff to free them in the earlier turns. They all hold Killing Edges so some care should be taken in fighting them.

Much like the last defense chapter, you can opt to find a comfortable setup and simply maintain your formation for the most part. Unlike that chapter however, the boss has to be defeated in order for the chapter to end. Barat is very dangerous with his Master Axe and capped defense stat, but a strong magic unit should be able to finish him without too much trouble, especially with supports to help dodge his counterattacks. It is very helpful to steal his Tordo Scroll before engaging him due to the fact that it protects him from critical hits as long as it is in his inventory. If you have defended until turn 15, he and his subordinates, each holding Master Lances, will start moving toward your units. This will allow you to engage him using an optimized defensive setup, but will also force you into a confrontation whether you are ready or not.

Reinforcements will arrive initially on every other turn, then on every turn as you start nearing turn 15. They are usually comprised of about a dozen Armor Knights or Mages, but turns 7 and 10 will place ballistae at the lower end of the map. Be very careful about using flying units once they appear. Some of the later Mages will also have Meteor tomes. If you are comfortable taking risks, you can move your strongest units in the lower part of the map to capture the Bishops in the early turns and take staves. The reinforcements will quickly converge on them, so be sure they are durable. If they are strong enough to handle the reinforcements safely, they can also destroy the ballistae while they are there.

Also be sure to visit the shops early (preferably with Shanam) if you want to buy anything. This shop will be the last in the game that sells Heal staves, so stock up if you need to.