The City Without Light (Silver Snow)

The City Without Light 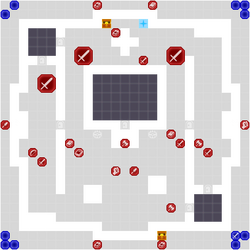 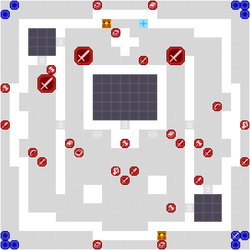 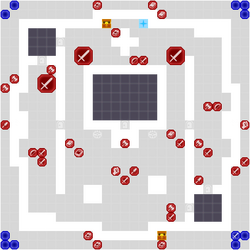 Chapter script
[view]
“Following Edelgard's defeat and Rhea's rescue, the resistance army discovers the existence of another adversary--a group operating behind the scenes within the Empire. To prevent disaster from befalling Fódlan, the resistance army heads for Shambhala, the enemy's stronghold.”
—Opening narration

Following the posthumous guidance left by Hubert, the Resistance Army advances on Shambhala, the underground home of Those Who Slither in the Dark. Despite her weakened state from the five years she spent imprisoned, Rhea insists on joining the march.

Upon arriving in Shambhala, the army is left stunned and perplexed by the city before them and the strange technology upon which it was built. Byleth's force nevertheless advances, eventually confronting Thales in Shambhala's command center. Upon his defeat, Thales attempts to eradicate his enemies with a last-ditch launching of javelins of light, but Rhea transforms into The Immaculate One and takes flight, risking her life as she destroys enough of the javelins to allow the Resistance Army to escape. Thales is killed in the destruction he summoned, and Those Who Slither in the Dark are defeated, bringing an end to the danger they posed to the continent.

In the central room

In the Titanus control room

In the Viskam control room

These won't stop until Bias, in the northwest room, is killed.

In this chapter, your units are scattered to the 4 corners of the map. The Boss of the map, Thales is hidden within the Center building, behind a locked door. This Chapter only really starts after you have breached the outer wall and gotten a unit within the inner district of the map. As soon as this happens, two things are triggered: 1) a new Titan will spawn every 3 turn turns (every turn on Maddening) in the South and 2) The Viskam near the center building will activate. Viskam are automatic Magic Damage turrets with 1-9 Range and 25 Mt. These are not terribly strong, but they can be a bit of an annoyance. There are also 2 hidden rooms located in the North-West and South-East of the map. The NW room contains the Gremory Bias; killing her will stop the Titanus reinforcements. Inside the SE room is a Gremory named Pittacus; defeating her will disable the Viskam.
As the reinforcements and Viskam's attacks do not begin until your units leave the outer walls, a good strategy is to first completely clear the outer wall, kill all enemies, grab all chests before making your way to Bias, as killing her will disable the Titanus reinforcements. These are especially annoying on Maddening, when they spawn every turn and harder to deal with than the Viskam. Once the reinforcements have been dealt with, you can make your way towards the SE room to kill Pittacus and deactivate the Viskam, or just head straight for Chilon and then Thales
Once you kill Chilon and enter the Central room, you will face Thales with a small group of enemies. Killing Thales on the same turn you open the door is recommended, as on his first turn, Thales will always cast Quake Σ, which hits all units except fliers, being able to kill some of your weaker units.
Besides the Quake Σ, Thales himself himself should be pretty easy to deal with, making good use of you Combat Arts. Thales has both Death and Dark Magic Range +1, giving him a total of 4 Range, while also havingKeen Intuition, giving him +30 avoid when battling any unit more than 2 spaces away. Combat Arts and Gambits are therefore your best choice to whittle away at this health (although Gambits might be harder to hit, with his 45 Charm), before dealing the final blow.