Fire Emblem Wiki
Register
Don't have an account?
Sign In
Advertisement
in: In need of a quote, Stubs, New Mystery of the Emblem chapters

Two fire dragons from the bottom, one from each side, mage dragons from second left-right every turn, even after Gharnef has been defeated.

Eliminate the Meteor-wielding Dark Mages close to your starting position as quickly as possible. You can exhaust your Silence staff in this chapter as you approach the throne room, since this is the last chapter where you will be fighting enemy mages. While Gharnef is not affected by said staff, it should be enough to shut down his subordinates with Meteor and Fortify for one turn.

Gharnef will leave the throne to attack you the next turn as soon as a unit enters chamber below the throne room. He must be killed in order to obtain Falchion.

The treasure chests could only be accessed by warping your units to the isolated corners. Marth must not be warped to those areas unless a Rescue staff is used on him. (In the original Mystery of the Emblem, only Yuliya could use said staff) 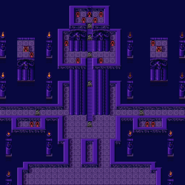 Chapter 23 map from Mystery of the Emblem.