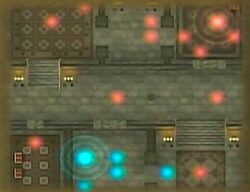 Chapter script
[view]
“I was here years ago. As I remember, there's a large armory tucked deep inside the building. And if I understand correctly, Begnion soldiers guard valuables they've stolen from rare objects to necessary supplies in that armory.”
—Sothe before the battle.

The Dispossessed is Chapter 1-2 of Fire Emblem: Radiant Dawn.

Laura - Laura is a Priest and a decent one at that. She is a healer, and as such needs to stay in the back and watch out for enemies. One or two hits will normally finish her off, so keep her away from the front lines and make sure she is out of range of archers, as they will normally go for her if they have the chance. She has good magic growth at 70% so she will be able to heal quite a bit of health rather soon. As long as you keep her out of harms way, and maybe give her a level here and there with bonus exp just to keep her up to par with everyone else.

Sothe - Sothe is a Rogue, already starting as a second-tier unit, and a rather good one at that. He has the ability to steal an item from a unit as long the item is not equipped, and is not too heavy for him to carry. He is a good unit to start and can wall very well to start due to the fact that he is already a second tier unit and has 35 health to start and 14 defense, so enemy units will be doing small damage to him to start. He is very good at his class of Rogue, as he can steal items and find hidden items without too much worry about the damage enemies will do to him. If you want to use him, go ahead; he is necessary in almost every chapter you have to use Micaiah, so get used to seeing him, you may as well make the best of him while he is around.

At the start of this chapter, you will be given a new character who will be invaluable to your success through this part of the game; Laura. She's a healer, so she'll be extremely useful in healing your injured units. Be careful about protecting her, as most enemies, especially on the harder difficulties, will be able to defeat her in one round or even one hit.

As with Chapter 1, your strategy will differ slightly depending on the mode you are playing. In Easy Mode, you have to defeat all the enemies, whereas in Normal/Hard Mode, you have to have Laura arrive on the flashing tile at the top of the map.

Be careful as you are fighting your way up the map, as the archers up top will move to attack you, and having the height advantage, they are unlikely to miss. There's one with a steel bow which will likely defeat both Laura and Micaiah in one hit, so watch out. Also, be careful as there is a gap just above your starting location, so the enemies will be able to climb down and attack you as well.

On turn two, Sothe will appear at the top of the map, to the left. He will be a very powerful fighter and invaluable to your success. When he appears, you should have him immediately move downwards to join up with the rest of your party. One of the two chests in the bottom-left corner will contain a Thani tome for Micaiah, which will be the most powerful spell available for her until Part 4, and will also make her incredibly effective at defeating Knights and Armors.

When you get to the boss, you can have your other units play around with him, although his defense is high, so you might have trouble damaging him. Your best bet is to have Micaiah attack him with Thani; she will more than likely be able to kill him in one hit.