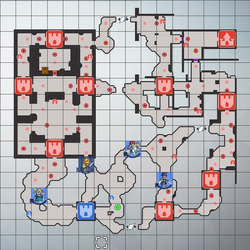 The script can be found here.

Marth informs the party that a mage is helping the Gristonne army resurrect the Chaos Dragon, just as the legend says. Darios decides the party must go to the Dragon's Table to stop it. However, Robin is suddenly weakened and Chrom took care of him inside the party’s base. This caught Marth’s attention when he noticed something suspicious about Robin’s weakened state while under Chrom’s care, and decides to go undercover to keep an eye on both Robin and Chrom.

This is a two part chapter, so you want to do this wisely. First, you must defeat the mages powering the Wall of Darkness. After that is done, the Wall of Darkness will vanish and you can fight Validar. However, there will be a mage powering poison inside the Dragon's Table, so defeat him first, and then fight Validar. Suddenly, while you are doing this, Robin will appear at your base as an enemy, and he and Chrom will be fighting each other. Although Marth will come and help Chrom fight, you need to quickly defeat Validar, and then fight Robin. As soon as he is defeated, he turns to normal and the chapter is finished!