Start a Wiki
The Dragon's Table

Nagi (Turn 1, Exclusive to New Mystery of the Emblem)

Chapter script
[view]
“In front of the towering craggy mountain, a stone bridge. Then, a stone, spiraling stairway that seemed to stretch up toward the heavens. From the rough bare rocks, ominous roars and deep breathing can be heard, as if the mountain itself were alive. The Dragon's Table... an ancient relic of the old dragonkin. The place where Naga, the Divine Dragon King, sealed the earth dragons. And now, six hundred years later, the earth dragons were awakening. Countless evil demons were being born...”
—Opening Narration, New Mystery of the Emblem
“A stone bridge leading up the tall rocky mountain. This stone bridge seems to stretch to the heavens, as it spirals around. From the rocks fearful roaring and breathing sounds can be heard, as if the mountain was alive. The Dragons’ Altar... It is an ancient ruin of the dragon tribe, and the place where the Divine Dragon King, Narga, sealed away the Earth Dragons. Now, after a period of 600 years, the Earth Dragons are currently awakening, and countless evil demons are being born... ”
—Opening Narration, Mystery of the Emblem

Reinforcements start appearing from the two treasure rooms near the bottom of the map starting on turn 4, and continue to appear almost every turn until turn 14. The first set includes a Mage Dragon and a Fire Dragon. More reinforcements start appearing turn 6, in the corridors above the treasure rooms. Each includes a Sorcerer with Glower and a Fire Dragon. Then even more appear later, from the top left and right corridors. 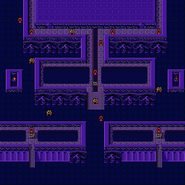