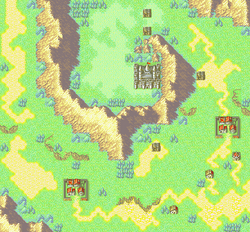 Igrene (from start)
Perceval (if not recruited or killed in Chapter 13, can be recruited by Larum or Elffin)
Garret (talk with Lilina)
Fae (complete chapter)

Chapter script
[view]
“After saving the hidden village of Arcadia, the Lycia Alliance Army followed Igrene out of the desert. Roy's next task was to confront the Revolutionaries in Etruria. However, a messenger from Nabata came to him with disturbing news. Fae, the little Dragon girl, had left Arcadia, following Roy. It would be a disaster if the Revolutionaries or Bern got their hands on her. Bent on finding her before the enemy, Roy led his forces toward a small fort on the Etrurian border.”
—Opening Narration

The Dragon Girl (竜の娘 Ryū no musume) is Chapter 15 of Fire Emblem: The Binding Blade.

In any case, you should have given Larum/Elffin the Boots item from Ch. 14, so that they can move 7 spaces instead of just 5, making it much easier for them to stay with the units while still being able to reach Percival when he finally reaches your units.

You can have cavalier units escorting Lilina all the way to the village while one half stays near the forests east of the western village, but again, keep them close, as there are many starting units that will rush you and will make short work of your cavaliers if you separate them.

However, there are several mercenaries that will come toward your group initially, so make sure to protect your axe men or take archers/mages with Aircalibur to support against the units and do well against the wyvern knights.

Since there are archers/snipers with a Valkyrie who has an Aircalibur on this map, flying units are slightly ineffectual. Just use lances with your cavaliers, and you'll be fine. Due to the aforementioned cavaliers, the horseslayer would go a long way. If the groups are balanced, they should both be able to defeat the incoming forces with no casualties.

An odd strategy, but can prove effective, is while your ground units recruit Perceval and Garret, you can send a promoted Geese and/or Gonzalez over the mountain to kill the boss and the units surrounding him. If you monitor their health properly and score the kills you need (i.e. getting lucky crits, dodges, and hitting consistently), the chapter will be pretty much over with enough luck. Considering this chapter is axe-friendly, bringing them both would cause few side effects. The duo could clear the path and one of your units (Perceval if you didn't bring other cavaliers) could ferry Roy to the throne. This will feed Geese and Gonzalez loads of EXP and allow you to finish the chapter with minimal effort.