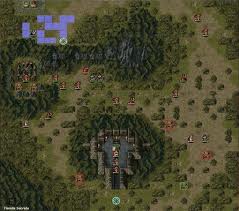 Chapter script
[view]
“Dohlr...Land of the Manaketes. Before Medeus, the dragonkin had few dealings with the human realm, but when the Shadow Dragon came, everything changed. He sunk all Archanea into a cycle of war, in which heroes rose and heroes fell- always claiming his cause was just and the human deaths deserved. But now Medeus's empire was crumbling...He was nearing the end of his reign...even as Marth was nearing then end of his long quest.”
—Opening Narration

The Dragonkin Realm is Chapter 24 of Fire Emblem: Shadow Dragon.

This is the last Secret Shop in the game. It is located on the lone plains tile at the very edge of the map in the mountains in the southwest. Like the Secret Shop in chapter 21, this one contains a variety of stat boosting items. Of note is the fact that Boots can be purchased to increase movement range. In the DS version, they are replaced by three Arms Scroll's, allowing one to boost weapon ranks for one or multiple units considerably.

Seeing as the title of this chapter is "The Dragonkin Realm," you can expect there to be a decent amount of manakete in this chapter, and luckily there is an armory near your deployment that sells dragonpikes and wyrmslayers if you have run out of dragon-slaying weaponry (DS only.) The Falchion and Tiki’s Divinestone would also comes in handy here. While Elice starts off with the Aum Staff in the original, the remakes place it in a little temple with one chest In the southwest of the map. However, there is a thief who starts off closer to the temple than your army does, so it is important to kill the thief before he makes off with the staff. A ballistician such as Beck or possibly Jake is useful for taking out the thief. There is a small passageway over which you can cross the mountains to the south of your deployment if you wish to send some units in that way, although it can be somewhat cramped and risky, seeing as there are a couple snipers and mage dragons on the other side of the passage, which is important to note as mage dragons are immune to magic (the boss, Xemcel, is a mage dragon as well). However, one or multiple flying classes armed with dragonpike can be used to defeat the boss instantly and claim the castle without being harmed except by the boss itself. 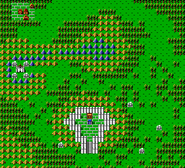