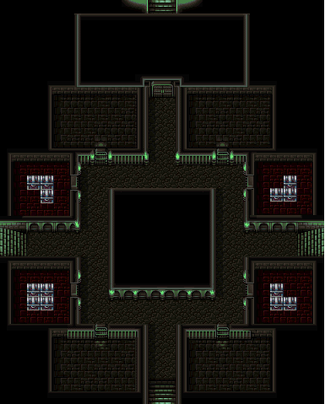 Dalsin (enemy, talk with Leif or Lifis if Yubel is saved in Chapter 3)

Chapter script
[view]
“Now in Raydrik's clutches, Leif was detained and taken to Manster by Imperial soldiers. His imprisonment bore a certain irony: Manster was once the sovereign land of House Leonster. It was now governed by House Friege, who had personally been installed as rulers by the Emperor of Grannvale after his conquest of North Thracia. Raydrik himself had once been a general of the Kingdom of Conote, but colluded with the Empire during the war. For that service, he was made Baron of Manster. While still subordinate to Lord Bloom, head of House Friege, Raydrik was entrusted with the day-to-day management of Manster. Leif would now see firsthand what life was like in his family's former home...”
—Opening Narration

The Dungeon is Chapter 4 of Fire Emblem: Thracia 776.

Despite its small size, there is a huge amount of factors to take into account. Leif, Karin, and Fergus are in the lower left-hand room, Lifis and three brigands are in the lower right room, and in the left and right corner rooms are civilians (movement range 4). Leif's party has had their original weapons confiscated by the enemy, so you will need to trade with their saviors.

When Lara is told she is their only hope, it is not a sarcastic statement. Should Lara die before you obtain any other Door Keys or Lifis with Lara's Lockpick or the Lockpick obtained in the last chapter, you have effectively lost, since, while Machyua does possess a key, she does not possess a Door Key, only a Chest Key, so keeping her away from more than one enemy and keeping her from being captured is essential for completing this map.

Unlocking the civilian's cells will have them head for the nearest exit (upper left hand cell's prisoners head for the west exit, upper right hand prisoners for the east exit). Take caution to free and equip Leif, Fergus, Karin, and Lifis; however, enemy reinforcements will come from their exit points. If all prisoners are freed, you will proceed to The Hero of Winds, where you can find extremely valuable assets, such as Asbel, a Brave Sword, and the Ced Crusader Scroll. However, the soldiers in the area will capture them whenever they get the chance, and if they're taken to their exit points by their captor soldier, they will not be saved and you will not proceed to chapter 4x.

The Soldiers in this area present a threat not in quality but in quantity. Proceed fast, as their reinforcements will compound with enough turns. Each will be carrying vulneraries, so this is your best chance to stock up for the coming chapters. The easiest method is to use Lifis or Lara to steal them. You can leave this chapter with upwards of a dozen this way.

The Brigands in Lifis' cell will attack the Soldiers, keeping the duty of fending off soldiers aided, but it is only a matter of time until they are either killed, captured by an enemy soldier, or escape.

Be absolutely prepared before you unlock the north door. An ambush is lying in wait behind it, including Dalsin. If Yubel was rescued in Chapter 3, talk to him with Leif to recruit him.

Also, make sure you have all of your other units escape before Leif, as his escape will end the chapter, and any units that didn't escape will not be present in chapter 4x or any other chapters for a while.