The Emblem of Fire

The Emblem of Fire 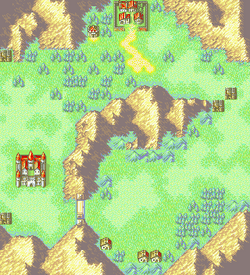 Chapter script
[view]
“Lord Eric's betrayal left Roy in a greater state of shock. He had the impresson that Eric wasn't the only traitor around. Lycia was no longer safe. Hurrying toward Ostia, Roy decided to pass through the sparsely settled mountains to avoid unnecessary trouble.”
—Opening Narration

The Emblem of Fire (炎の紋章 Honoo no Monshō lit. The Crest of Flames) is Chapter 5 of Fire Emblem: The Binding Blade.

After the World Map scene finishes, a sequence begins with a group of Bandits talking amongst themselves. The Bandits discuss raiding the nearby villages, and they also comment on a small military group that had been spotted in the area, although the Bandit leader, Dory, says that they are simply a weak remnant of the Lycian army.

After the Bandits finish talking, the focus returns to Roy's group. As Roy's group passes through the area, a group of villagers appeal to them for help in defeating the raiding bandits. After briefly consulting with Merlinus, who was against the idea, Roy decided to help the villagers, and a battle between Roy's group and the Bandits began.

See: The Emblem of Fire/Script

The entirety of the map in which the battle takes place is very mountainous. The player's units are deployed to the east surrounded by a veil of mountains that separates the player's unis from the enemy forces. There are only two exits to the area blocked off by the mountains. The first is a small pass to the north-east of the mountain. The second is a two-spaced wall to the west only a few spaces from the Bandits' Castle base; this wall will only be opened when a player-controlled unit ends their turn next to it. The North-eastern exit includes a pair of forts which are helpful when defending.

Inside the area blocked off by the mountains is a large group of Forest spaces and a few houses that offer some advice to the south-west. These areas are of little help, though, as no enemy units will likely venture that far.

At the top of the map in about the middle is the only village on the map; within the first few turns, Saul and Dorothy will leave the village and travel offscreen. If a player-controlled unit visits the village, they will receive Gant's Lance, a personalized lance with 50 uses.

In the northern area above the main group of mountains in the middle of the map is a large open area around the village. This area is heavily forested, which is helpful as it will hamper the movement of the enemy forces while moving through the area, although player-controlled units will suffer as well.

The battle of Chapter 5: The Emblem of Fire can be fought several dozens of ways due to the odd layout of the battle map. However, there are two main strategies usually used.

The first strategy is a simple one; the player pushes all of their units up to the western wall and waits a turn. They then let one unit open it (by ending their turn next to it) and stream forward with the rest of their units, quickly killing off all the enemy resistance around the Old Castle. They can then simply kill the Boss Dory and capture the Castle with Roy.

This strategy is not recommended, however, unless you simply want to quickly get through the level with the least effort. This strategy will also require that your units are slightly stronger than they usually would be by that point in the game, to be able to kill all the enemies near the Castle in roughly a single turn.

Doing this will also cause you to miss the northern village with Gant's Lance, unless you send a unit to the top village before conquering the castle.

The more normal strategy for this level is considerably safer than the speed strategy. It consists of the player dividing their forces into two groups.

The first group, usually of units the player wishes to train a bit more, or of lower level than the others, will make their way up through the north-east pass.

The second group, preferably of the stronger, more experienced units (Marcus, Dieck, etc...) will gather just away from the western wall.

The first group will slowly move through the northern area of the map picking off enemy resistance in that area and gaining their experience points, and also visiting the village.

Meanwhile, the second, smaller group just waits near the wall. Once the first group defeats all of the northern units (about the time they defeat the enemy Nomads), the second group can open the western wall and attack the units near the abandoned Castle.

In the next turn, the first group will come from the north and help with any remaining fighters as well. Once all enemy units, save the Boss, have been destroyed, the player's units can gang up on him and quickly defeat him, then Roy can capture the Castle to end the battle.

A good idea for defeating the Boss is to attack him with a ranged weapon or put a unit with high defense two squares away from him. He will attack that person with his hand axe and will lose the critical bonus of the killer axe, allowing you to charge him with direct attacks. After the first turn of attacks, put a person two squares away, even if Dory has hand axe equipped.

IF YOU ARE IN EASY MODE, Dory will attack the person two squares away from him, as long as that person cannot attack back (unless you attack Dory with Roy).

There are no new units that can be recruited during this battle. However, upon completion of the Chapter battle, both Dorothy and Saul will automatically join Roy's forces.