View source
watch 32:23
'Fire Emblem' - The Sacred Stones - Chapter 5
Do you like this video?
Play Sound 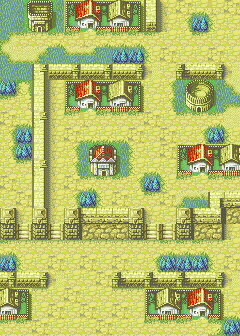 Chapter script
[view]
“An ominous wave of dark creatures washes over the continent... Eirika's journey to find her brother, Ephraim, grows ever more perilous. Still, she presses on despite the danger. Her will is strong. The town of Serafew, located on the border of Renais and Grado. The people of both countries have long used the town as a meeting place. It stands as testimony to the friendship the two nations have shared these many years. Now, however, Serafew is teeming with Grado troops.”
—Opening Narration

The Empire's Reach is Chapter 5 of Fire Emblem: The Sacred Stones.

You can recruit Joshua (your first Myrmidon) and Natasha here. In the cutscene before the mission, you meet Saleh, a Sage searching for an indigo haired girl. He is actually looking for the Manakete Myrrh, both of whom will join you later. There is also an Arena, and you also meet some future characters when visiting the villages, like Amelia and Tethys, who both give you items. From Tethys, you receive a Dragonshield, and from Amelia, a Torch. You also get an Armorslayer and a Secret Book, and if you save all the villages from the bandits that pop up along the east side of the map, you also receive your first promotional item, a Guiding Ring.

This chapter is not particularly difficult to beat, unless you are trying to go to every village. It makes it a little harder, but not by that much. Send Franz up the left side if you have been training him, and Seth if you have not. They can easily dispatch the few units in your way. Many of the items will come in handy, save the Torch, but the Guiding Ring might make the last house worth it. Natasha may be difficult to keep alive, especially when she is going to recruit Joshua (who will notably not attack her), but she will prove to be one of the most useful units in the endgame and Creature Campaign (especially if promoted to a Bishop). Joshua is definitely worth recruiting, even if you do not intend to use him, he is incredibly dangerous as an enemy (especially with his Killing Edge, a very useful sword to have as well, for Eirika, Colm, or even Seth).

If you are not planning on using Arena Abuse, then this is a good chapter for Ross to gain experience if he has not promoted to a normal unit yet. There are Soldiers in this level, and thanks to their low stats and Weapon Triangle disadvantage (they are lance wielders), they are prime targets for leveling up Ross.

The Armorslayer picked up in one of the villages might be useful for the boss, if Eirika needs experience (and you are holding on to her Rapier), or if you want Joshua to catch up with your advanced units.

This chapter is a common target for Arena Abuse, as it is a prime place with everything necessary to continue at the arena indefinitely. By use of save states in different emulators, players can effectively "undo" any turns where a unit died or even just lost money. Although the over-use of an Arena without save-states is technically not "cheating", it is generally frowned upon (even though using it without cheats is not particularly different from using the Tower of Valni over and over again).