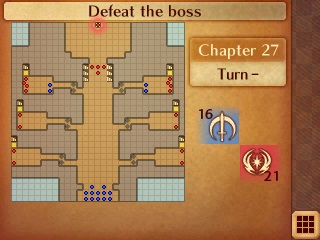 Chapter script
[view]
“Corrin opens the door to the throne room, discovering the true enemy that waits for them. The creature within the room is unlike anything s/he's ever seen.”
—Opening Narration

The Empty King (虚ろなる王 Utsuro naru Ō The Hollow King in the Japanese Version) is Chapter 27 of Fire Emblem Fates in the Conquest version. The player will not be able to save after completing this Chapter, nor return to My Castle. The player will also be unable to Kidnap units from this battle because of this. The Capture skill can be used, and the normal dialogue for capturing an enemy will display. However, upon completing this chapter, when you next return to My Castle, the captured unit will not be in your Prison. This chapter takes place in Shirasagi: Throne Room.

With the death of Iago and Garon's loyalist, and the capitals no longer in their control, Corrin and Azura leads the Nohrian siblings to the throne room to confront and kill Garon. They remain skeptical about their claims about Garon being a monster and Leo asks why they didn't tell them before and why they were the only ones to know about the truth of Garon. Azura cannot explain because of the curse and all they can tell them is that they had to come to Hoshido so they expose Garon's true form and Corrin asks for their siblings to listen to them about the truth about Garon and to see what's beyond the Throne Room. Xander eventually agrees to this and decides to trust them, but warns them that despite being their siblings, if they are lying and intends to betray them, they will be executed for treason.

Corrin accepts this and opens the door into the throne room, where they manage to prove the truth of their words when Garon, seated upon the throne of truth, is exposed and revealed to be a slimy monstrosity in actuality. Azura reveals to them the real King Garon; a monster. Angered and shocked, Garon curses Corrin for tricking him and attempts to kill everyone. Corrin attacks him. However, their Grim Yato is unable to hurt him, and in retaliation, Garon launches a strong blow at them. Elise begs Garon to stop and Azura tells the siblings to fight Garon, but they refuse because Garon is still their father despite knowing his true identity. Corrin begs them to put aside their disbelief and fight as the fake Garon is not their real father, but a monster. Garon taunts Corrin about turning his children against them and attempts to kill Corrin, but the attack is blocked by Xander.

Xander calls out the fake Garon and tells him he is no longer the father he once looked up to and that the real Garon would never have used his strength against his own children or needlessly conquered or ruined another kingdom and that the "Garon" he sees is just a pretender. Xander tells Corrin he will fight alongside them to kill Garon. Suddenly, Xander's Siegfried reacts to Corrin's Grim Yato, empowering it into the Shadow Yato. Corrin decides to test the new Yato on Garon, and it hurts him as he screams in pain, and prepares to kill them and his own children as Xander declares that his reign is over and convinces the siblings not to do nothing and help fight alongside Corrin to put an end to Garon and they gain their confidences to do so and the fight against Garon begins.

After the battle, Garon is killed and dissipates into water. The Nohrian siblings have barely any time to process their grief and shock. Corrin tells them the war is now over and attempts to free the remaining captured Hoshidans, however, they are caught off guard by a sudden attack launched by a possessed Takumi. Corrupted and fueled by anger and vengeance, his Fujin Yumi has been corrupted into Skadi and attacks the Nohrian royals. Corrin attempts to talk him out of fighting as they already killed Garon, but he is unreasonable and Azura tells them they have to kill Takumi as he is possessed just like Garon was. With no other choices, Corrin walks towards Takumi with the intent of letting him kill them, as they blame themselves for letting Takumi die and betraying him and hopes his hatred will go away, however, they are struck when their Shadow Yato fails to deflect an attack launched by a single arrow shot with Skadi, causing them to slip into a state of unconsciousness.

Depending on the difficulty attempted by the player, the enemies and unit placement will change:

While most of the units on the side should not be a great threat, the biggest issue will most likely be the group guarding Garon. On all modes, the Lancers come with Counter and Countermagic, making them especially dangerous to deal with, as well as Movement +1, meaning they will keep up with the Merchant. On Hard Mode and Lunatic Mode, this group will all have Spendthrift; on Hard the Lancers have one gold bar, while the Merchant has two, and on Lunatic, each unit has one more. The Merchant also has Wary Fighter, making it difficult to kill him in one turn. While the accuracy can be put into question depending on who is tanking (Lancebreaker and Bowbreaker can deal with them easily), they can cause a lot of damage if they hit. It is best to avoid dealing with this group, since your attacks become rather limited during your turn.

If you do not want to take out this group (since you will either need shurikens or a high critical hit weapon or damage boosting skills), you can go through the side rooms. You will still need to take out the respective combatant units, even if they move out of the room, first. Each room has a Shrine Maiden. The four in the bottom and middle rooms have a special version of Entrap. All six have Moon Festals. If you cannot take out the combatant unit in each room in one turn, kill off the Shrine Maidens first, so that they do not restore a majority of their allies' health which can prolong the fight.

The Entrap used by Shrine Maidens is a special, enemy-only version which will always hit your units (it has an accuracy of 200 with infinite range). The trick to manipulating the AI of the Shrine Maiden is to learn 3 facts:

Garon is much stronger in this route on all modes. Although he will not have Draconic Hex (which only appears in Birthright), he does have Dragonskin, which will reduce the attacks of everyone by half. This does not apply to Corrin with the Shadow Yato, which deals 3/4th of its damage instead. On Normal, Garon only comes with Armored Blow and Warding Blow, which with his stats will mean whenever he attacks, he will most likely take little damage. On Hard, Savage Blow is added into his skill list, which can weaken your units enough for the remaining hostiles to kill them if they haven't been lured/disposed yet. This is even worsened on Lunatic Mode where Renewal is added, meaning that he will heal 21 hitpoints at the start of the enemy phase.

Therefore, on Lunatic Mode, you may want to bring several powerful units to dispose of Garon in one turn before he is able to use Renewal, as he can delay your units long enough for the rest of the stronger hostiles to reach and kill your units. Rally units are helpful in increasing the damage output of your units. You may also have Songstress Azura sing to one unit, then have a nearby unit shelter her so that she can sing to another unit. Several freeze staves may come in handy for holding off the invaders before they reach your units.