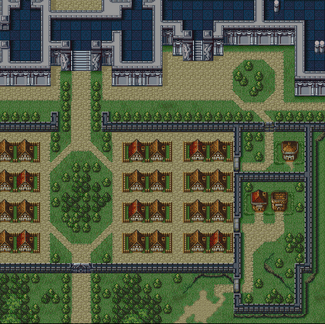 Chapter script
[view]
“How...Cruel...”
—Leif when hearing about the child sacrifices from August

The Escape is Chapter 6 of Fire Emblem: Thracia 776.

There are 2 main ways of approaching this chapter; you can either take Karin and fly everyone over to the exit as she suggests, or you can fight through the city. The latter, however, will have you facing the enemy units stationed in the northwestern area of the map, below the stairs. One of them is a Bishop equipped with a Meteor tome; be wary of his movement and range.

If you choose to fight, one possible strategy is to give Asbel a holy water, place him on the trees in the enemies' range, keep Leif and Nanna within three spaces for their support boosts, and let him mow them down as they try to attack. It requires a little luck, but the supports and terrain bonus will reduce the enemies' accuracy significantly enough that it is very possible to succeed unscathed. Once they are dead you will have a much easier time visiting the houses and dealing with the reinforcements.

After around 15 turns, Galzus will appear at the northern main stairs, and he is vicious. With his 8 movement range, his movement stars and high stats, he will likely kill any unit he approaches in one round. No matter where you are, if you see Galzus, run.

No matter which approach you take, Karin can be an invaluable unit; she can fly units over walls AND fly over to the villages to pick up items. Lifis/Lara are also especially useful for unlocking the doors, if you have no door keys left.

If you did not visit Chapter 4x, you will meet Ced and his army. They will exit to northern up of the map. You can save weapon uses by leaving the enemies to them.