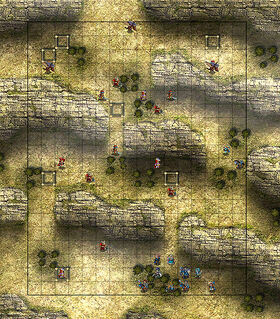 Chapter script
[view]
“Emmeryn confronts King Gangrel of Plegia, who demands the Fire Emblem, an item vital to the world's future. The parley ends with a declaration of war.”
—Opening Narration

The Exalt and the King (聖王と暗愚王 Sei'ō to Angu'ō lit. The Sacred King and the Dark King is Chapter 5 of Fire Emblem Awakening.

This is the first chapter available once the wireless options and the DLC gate are both unlocked. Therefore, on harder difficulties, this map should be significantly easier than the first 4 if you grind. Regardless, this chapter can still be completed without too much hair pulling if you choose to not grind.  There are barbarians, myrmidons, dark mages, and wyvern riders. Bring sword users, mages (you get another mage on this map already equipped with a wind spell so not as big a concern), and Lissa to make use of the rescue staff from Paralogue 1.

The first thing you will notice is Maribelle and Ricken. They appear north of your starting position and surrounded by enemies. Only Ricken can fight but he cannot take the heat for too long so it is best to rush some units north up the mountain path to help them out. While doing this, keep some strong units behind to handle the enemies immediately west of your starting position. Also, use the X button to see the huge range of the wyvern riders to keep weak units out of their way. Alternatively, have Ricken pair up with Maribelle and move her as far south as she can. Then use Lissa to rescue the pair so they'll both be out of harm's way and you can just head straight for the slaughter.

At the start of the enemy phase in Turn 3, reinforcements start appearing at the forts. In this turn only a dark mage, barbarian, and myrmidon will appear. If you want to avoid fighting them, have some units sit on the 3 forts on the first 2 levels of the mountain. However, the barbarian drops a hand axe so it's your choice. More reinforcements appear at the start of enemy phase in Turn 4. These will be wyvern riders all the way at the top of the mountain so you can't cover those forts, but that means they won't be a threat to you the turn they appear. The last wave of reinforcements appears at the start of the enemy phase in Turn 5.  This will be the most reinforcements featuring barbarians, myrmidons, dark mages, and wyvern riders. If you kept your units on the lower 3 forts, as well as the 1 fort in the middle of the map, then you should be fine. Remember, reinforcements mean more enemies which mean more EXP.  It's up to you to decide how many extra enemies you want to fight. When Turn 6 starts, no more reinforcements will appear so it is safe to move your units off of the forts.

The boss will move once you move into the attack range of either the barbarian, myrmidon, or dark mage located around the fourth fort in the middle of the map. He has a ranged axe so sword users sitting on that fort will most likely avoid him, but will not counter. Use sword users in conjunction with ranged units such as archers and mages to take him down. Make sure these ranged units can survive his counterattack and potentially another attack if he is not killed this turn. Chrom's Falchion does extra damage on the boss, so make sure to have him land an attack. Additionally, keep in mind any other enemies nearby. Keep your units on forts or woods with swords and this chapter should not be a hassle, even with the reinforcements.