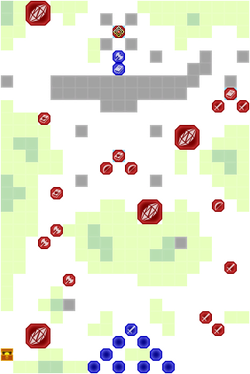 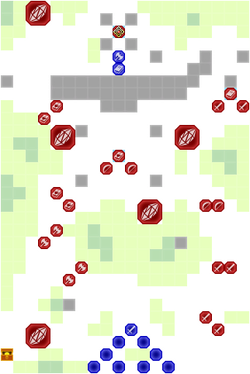 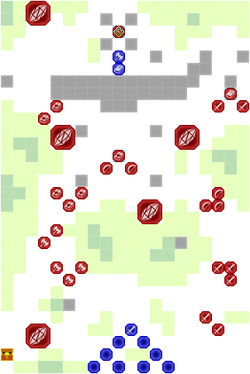 Rout all enemies except the Death Knight

Byleth, Mercedes, Caspar and 8 others

Chapter script
[view]
“Whispers of Death Knight sightings in Garreg Mach excite Caspar, but Mercedes has a much more pensive reaction. Something must be on her mind...”
—Opening Narration

The Face Beneath is Mercedes and Caspar's Paralogue Chapter in Fire Emblem: Three Houses. This chapter takes place at the Sealed Forest, and is available on all routes except Crimson Flower.

Shortly after reclaiming Garreg Mach, Caspar runs up to Mercedes and Byleth and informs them that an enemy battalion led by the Death Knight has been spotted scouting the Monastery. Mercedes, under the suspicion that the Death Knight is her long-lost brother Emile, asks for the Professor's help in confronting him.

During the start, Mercedes scouts ahead, managing to confront an isolated Death Knight and attempting to reason with him. However, Caspar, thinking she is in immediate danger, rushes in to help her. Shortly after that, the Death Knight's battalion rushes out from the shadows to attack. While they implore the Death Knight to join them in killing the Professor and their units, he refuses. While initially off-put by his response, the enemy battalion will still launch their attack.

While Mercedes is reluctant to battle the Death Knight, Caspar is eager to prove his mettle against him. She realizes that the Death Knight has no interest in chasing them down, so she implores Caspar to come with her back to the Professor. Even so, he can still be targeted and defeated just like any other unit.

After the battle is over, Mercedes and Caspar manage to find the Death Knight again. He reveals that he truly is Mercedes's younger brother Emile, and told her that he spared her life this one time due to them being siblings. Caspar expresses surprise at this revelation, and admonishes Emile for seemingly not caring for his sister. Both Mercedes and Emile attempt to convince the other to join their side, to no avail. Out of one final act of kindness to her, Emile gives Mercedes the Hero's Relic of Lamine, the Rafail Gem, stating that she must stay alive until he can kill her. If Caspar managed to defeat the Death Knight, he will give him his unique weapon, the Scythe of Sariel. After that, he will leave.

Caspar expresses confusion, stating that he doesn't really know if Emile cares for Mercedes or not. She states that somewhere underneath his mask lies a very sweet boy, which only further confuses him. However, with the battle finished and the mystery of the Death Knight's identity solved, both Caspar and Mercedes accomplished what they set out to do and returned to the monastery.

Excluding the Monsters and beasts that appear initially, additional enemy troops will spawn once the mission begins:

As per usual paralogues, you will fail the mission if any of the required units are defeated in combat (in this case, Mercedes or Caspar).

Mercedes and Caspar will spawn directly in-front of the Death Knight, completely isolated from the rest of your forces. This time, the death knight will not move (even on Maddening).

For Maddening difficulty, on the enemies' initial phase; the majority of the enemy troops will begin to move towards the Death Knight's location, although leaving Caspar and Mercedes stationary may allow them to be ignored for six or seven turns. If Mercedes or Caspar are not trained/leveled in your playthrough, they will quickly fall to this onslaught of enemies; If so, you want to prioritize saving the two as soon as possible. A combination of Stride (gambit) and Warp can quickly get a few (more capable) units close enough to buy them time; at least enough so they could regroup with the rest of your forces before reinforcements arrive. Gambits will prevent enemy troops from moving, so use them accordingly. If Mercedes and Caspar are very weak, move them to the bushes to the right of the Death Knight and move your units along one side of the map to regroup.