Chapter script
[view]
“Imperial calendar, the year 3, February… The holy palace of Akaneia was enveloped by a strange silence. Following a rebellion in Akaneia, many capable knights, starting with the paladin Midia, were captured. However, even then Akaneia had double Altea’s manpower, the palace streets teeming with soldiers. Nearly one year has passed since the Grustian expedition… And now, the decisive battle that would settle the fate of two nations was about to begin.”
—Opening Narration, New Mystery of the Emblem
“It is the 2nd month of the year 3 of the imperial calender... Akaneia’s holy capital of Pales is currently in the middle of a mysterious silence. There was a rebellion in Akaneia, led by the paladin Midia, which resulted in many skilled knights being defeated and captured. Even so, Akaneia still had double Altea’s army strength to arm the streets of Pales with. It has almost been a whole year since the Grustian Expedition. Now, the last decisive battle, which will decide the fate of the two countries, is finally about to begin.”
—Opening Narration, Mystery of the Emblem

The Final Battle is Chapter 19 of Fire Emblem: Mystery of the Emblem and its remake.

This chapter can be difficult if moves are not planned ahead. The vast majority of the enemies in this chapter are Paladins with Silver Lances. The best way to survive this chapter is to use Tiki and equip her with the Lifesphere. Have Tiki fly over the mountains located on the left side of the screen and use her to kill most of the enemies located there. Do not stray too far into the circle where the forts are located because more enemies will be coming out of the forts, so keep that in mind when approaching the forts with your army. Another way to survive this chapter is to have one of your characters (preferably a Dragon Knight or a Pegasus Knight because they can move more spaces and have the ability to retreat into the mountains once the Paladins start approaching) move halfway up to the town towards the right at the beginning of the chapter and lure the enemies down to the location where Roshea was recruited. After that, form a wall with your strongest defensive characters, for example Sheema (if you trained her on the previous chapter), Draug, Est, Palla, Minerva, and Tiki. Since the vast majority of the enemies have Silver weapons and a few carry Killer Lances, your best fighters would be those that have high luck, carry a Light Orb, or have good support with nearby allies.

The challenge is increased not only by harder enemies, but also the removal of the mountain pass to the village, the addition of more enemies in the village, and the inclusion of four recruitable units: the Wolfguard. Roshea must be used to recruit Vyland, who in turn will recruit Sedgar, who can recruit Wolf. All of the Wolfguard are extremely fragile and will likely die in one round either as an enemy against your units' counterattacks, or as an ally if they are allowed to be overwhelmed. Roshea is recruited by Marth if the only village in the map is visited. Brisk action is required as the Thieves will ransack the village in four turns on Lunatic, and the interaction with the village, Sedgar, or the thieves will trigger Vyland and a squad of paladins to appear at the rear end of the map. Sedgar will move forward to attack when any of the horsemen he is in a group with is triggered. In contrast, Wolf will remain docile if the Horsemen or Generals are drawn out in a manner that doesn't interact with Wolf's move range, however getting too close to the area around the boss will trigger reinforcements from the forts.

On higher difficulties such as Lunatic, it is advisable to defend against Vyland's squad carefully as to not defeat Vyland until Roshea can recruit him. Drawing out Sedgar's group by touching the end of the enemy Horsemens' range is a good way to draw Sedgar out. Finally, Wolf can be recruited by positioning Sedgar outside of the area that will trigger reinforcements around the boss, and making use of an Anew staff or a Phina as a Dancer. As Wolf will not turn aggressive if the units around him are drawn out properly, it is advised to clear enemies before attempting to recruit him. In attempting to recruit Wolf in this fashion, Sedgar, like many of your playable units, can survive one hit from an enemy Ballistician even on Lunatic but it can be helpful to position a Wolfguard character in range of the upper right Ballistician in order to draw and split fire away from Sedgar as to not have him come under fire of more than one Ballastician. Usage of Rescue will ease many of your strategies throughout this map.

on Turn 4,near the starting point: 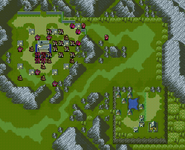