The Flame in the Darkness

The Flame in the Darkness 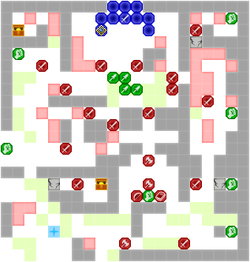 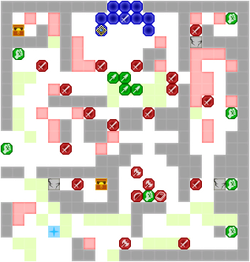 炎と闇の蠢動, Maneuvers in Flame and Shadow

Chapter script
[view]
“My child and I owe the people of Remire Village. If something's happening there, we must help them.”
—Jeralt to Manuela

After saving Monica and Flayn from the hidden room in Jeritza's quarters and achieving victory in the Battle of the Eagle and Lion, Byleth receives orders to, along with their father Jeralt, help the inhabitants of Remire Village, where the professor first met the house leaders.

After receiving worrying reports of peasants turning mad by Jeralt and attacking the city, the class marches to Remire Village to find out what is going on. The village, already set a flame, is drowned in chaos as several villagers, having gone feral, have begun slaughtering their fellow residents. Though wishing to rescue all of them, with the amount of carnage and the unlikeliness of them being able to subdue them, Byleth and their house bitterly kills them to spare the remaining sane villagers.

Leading the faction is none other than Tomas, the librarian of the Garreg Mach Monastery. Shocked by his appearance, Tomas reveals that he is actually named Solon, a member of a mysterious force. To make matters worse, the Death Knight has appeared once more. Though the battle is ferocious, Solon is defeated and forced to retreat. With no further need to stay, the Death Knight retreats as well. Thanks to the efforts of Jeralt, Byleth, and their house, the remaining villagers are saved.

In the aftermath, the Flame Emperor appears, stating that though they are working together with Solon, they were not the ones who dictated the attack on Remire Village. The Flame Emperor offers Byleth a chance to join forces and use the Sword of the Creator to enact their vision, but Byleth refuses. Though Jeralt wishes to apprehend the Flame Emperor then and there, one of the students of Byleth's house distracts them long enough for the Flame Emperor to slip away.

Back at the monastery, the House Leader reviews the events of the battle and solemnly regrets not saving more villagers. Due to a statement by Solon before his departure from the battlefield, they begin to wonder if further tragedies will come. Byleth is summoned by Rhea who thanks them for their efforts. While she continues to encourage Byleth to teach their students, she prays for their success, saying the name of the Goddess of Fódlan out loud for the first time: the Goddess Sothis.

Saved most of the Villagers

This chapter is easy to complete, yet difficult to do perfectly. On Normal difficulty, the Death Knight won't move, making the chest almost inaccessible except for flying units, as he will mostly kill anyone that enters his attack range with the support of his escort. On Hard difficulty, however, just as he appears, he starts charging towards Byleth, attacking anyone in his path. Jeralt will stay put until all citizens are either saved or killed, which will trigger his movement. The best thing to do is rush to help the furthest citizens as fast as possible with mounted units, keeping in mind the fire and the stairs. Even so, most likely at least one citizen will die, so it's advised to hurry. Be warned, however, that getting too close to Solon will result in all of the citizens being instantly killed, so steer clear of him until they are all rescued.

If you are planning on getting both chests, be careful. While the first one is easily accessible after you dispatch the violent enemies, the southern one is soon blocked by the Death Knight. The best strategies are either waiting for him to leave in pursuit of Byleth, leaving the way open, or to open the chest before he arrives at all.

The latter option may seem difficult to pull off, but it is not impossible. An example of a viable strategy is to send out a mounted unit (flying ideally) with some Chest Keys and the March Ring or using the Stride Gambit. If playing on New Game+, you could even use the Dance of the Goddess Gambit to open both chests on the first turn.

It is highly recommended to defeat the Cavalier reinforcements and claim their Crescent Sickles as your own, their massive 50 durability making them ideal weapons for Combat Arts and being very limited in their availability regardless. The Death Knight leading their charge, however, may make it rather difficult to reach and defeat them without him blocking your advance or ORKOing your units when you leave them in his range, especially on a first playthrough. Using a Horseslayer (found in one of the chests on this map) and/or the Knightkneeler Combat Art to defeat the Cavaliers and then defeating the boss that same turn should not be too hard, although it might require you to manipulate the Death Knight's itinerary by moving Byleth away from your main army.

Defeating the Death Knight is rather inadvisable on a first playthrough and just stealing his Dark Seal with a Thief unit will spare you a lot of trouble, although it is possible to defeat him. Again, using the Horseslayer and Knightkneeler are essential. Consider using Gambits as well to weaken the Death Knight, so you don't have to fear and tank his retaliation, until he is in the range of your Horseslayer or Knightkneeler user to KO him.