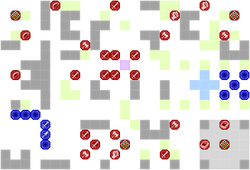 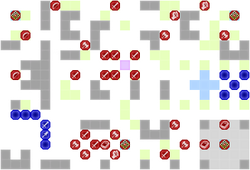 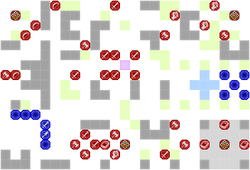 Byleth, Sylvain and 9 others

Chapter script
[view]
“Sylvain is unable to stand idly by when he learns that the band of thieves once led by his brother, Miklan, are again causing trouble in Margrave Gautier’s territory.”
—Opening Narration

The Forgotten is Sylvain's Paralogue Chapter in Fire Emblem: Three Houses. This chapter takes place in Kingdom Territory, and is available on all routes during White Clouds after completing Chapter 6.

This paralogue is available during Part I: White Clouds from 10/5 until 2/22. It is unlocked once Sylvain has joined your house. The suggested level is 13.

The Lance of Ruin was available to obtain at the end of Chapter 5, however Byleth could have returned it to House Gautier by choice. If Sylvain was not in Byleth's class at the time or they chose to return it with him in the house, the lance can be obtained at the end of the chapter.

“Defeat the thieves before they retreat. You can get rewards based on how many you defeat.”

If all thieves are defeated:

If most of the thieves are defeated (more than half?):

Upon completion of the Paralogue:

This mission will require you to split your forces to attack four different exits that the thieves can use to escape. Don't immediately go after the thieves that have items, or you will be hard-pressed to catch them before they escape. They move on turn 4 enemy phase. Take out the four enemy bandit leaders first before worrying too much about the ones that will drop items.

Each of the four bandit leaders will be equipped with an Iron Shield, which the player could optionally steal, but it is likely that the player will have access to Steel Shields at this point, so it isn't really necessary.

When engaging any enemy unit in this Paralogue, make sure to kill it quickly, as it will run for one of the exits upon taking any damage. The bandit leaders will not flee, though. 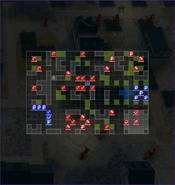 The map as seen during Battle Preparations, without the escape routes highlighted.

One of the 4 escape routes that the thieves can retreat from.