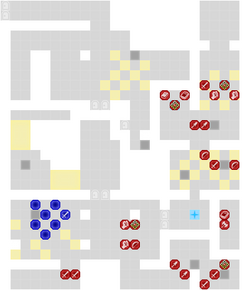 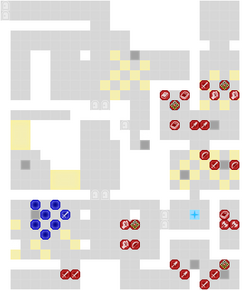 The Fourth House/Script
[view]
“Abyss is home to those who shun the light of day. It is the secret shadow of Garreg Mach, if you will.”
—Constance

The Fourth House is the first chapter of the Cindered Shadows side story for Fire Emblem: Three Houses.

995 years ago, a ceremony was held to commemorate the completion of the construction of Garreg Mach Monastery. Saint Seiros, along with the four apostles Noa, Chevalier, Timotheos, and Aubin, presided over the ceremony called the Rite of Rising in an attempt to resurrect the goddess. But the rite failed. The four apostles bore the blame for the rite's failure and disappeared, and their names and bloodlines became lost to time.

Back at the Officers Academy one night, Edelgard, Dimitri, Claude, and Byleth chase after a suspicious looking person, only to discover a hole in a wall leading down into a tunnel. Linhardt, Ashe, and Hilda, wondering what the professor and all the house leaders are up to, come to investigate as well, and all decide to go down into the tunnel together.

Meanwhile, The Ashen Wolves down in Abyss hear news from a rogue of some surface dwellers following him down. Yuri, Balthus, Hapi, and Constance go to meet with Byleth and the students, but the Ashen Wolves have no intention of letting them simply wander into Abyss without a fight.

After defeating the Ashen Wolves, Hilda recognizes Balthus as an old friend of her brother's from back in his academy days. After realizing they aren't enemies, they explain more about Abyss. No one knows why all of the tunnels and structures exist under Garreg Mach or what they are for, but people that have had no where else to go have found sanctuary there. Normally surface dwellers and Abyssians don't get involved in each other's business, but mercenaries have been attacking the place recently, hence the Ashen Wolves initially hostile response. Constance takes the opportunity to ask for Byleth and the students' help driving away the mercenaries, seeing how strong they all are, and as how very few people living in Abyss are capable of defending themselves, and Byleth and the students agree to lend their aid.

Upon starting the chapter, the player is given immediate access to the following units, each starting at level twenty:

Unlike in the base game, all units will not gain skill experience or class masteries.

Before you begin your battle against the Ashen Wolves, make sure to take the time to reconfigure your party members' abilities and classes. In particular, Claude is best switched off the Wyvern Rider class in favor of the Sniper class for Bowfaire and Bow Range +1, while your other characters should equip Lancebreaker, Axebreaker, and Swordbreaker as appropriate.

Though you may be tempted to try and push forward as quickly as possible, this is not advised, as the Ashen Wolves will spring plenty of traps and ambushes that will punish you if you overextend. You also have only 5 charges of the Divine Pulse, so try to use them very sparingly. Keep Edelgard in front of your formations as much as possible while classed as a Fortress Knight, except when you have to confront enemy mages (keep Edelgard away from Hapi and Constance in particular).

One other thing to be careful of is the battalion HP on each of your characters; you are only given D-C tier battalions, none of which have particularly high durability, so taking too many hits (regardless of healing) will cause them to flee and thus remove their bonuses for the remainder of the mission. While you could potentially use this to your advantage with abilities such as Battalion Wrath, it is often a gamble to do so.

Your first threat in the mission will be Balthus, who wields the Vajra-Mushti gauntlets; these will give him impressive damage output and a critical hit chance that can make short work of any of your characters. Play defensively at first, whittle down Balthus and his group, and then heal up as needed before you head towards Hapi.

Once approached, Hapi will summon a sand worm monster and then warp behind a gate that you will not be able to unlock (though there is a door leading to her further down the winding passage). She will be able to pelt you with spells from relative safety in her room (keep in mind that Valkyrie gives her Dark Magic Range +1), but Ashe or Claude should be able to take her out if you use Linhardt to bait her out. When facing the monster, you shouldn't worry about breaking all of its barriers just for materials; it is unlikely that you will use them.

As you make your way down the winding corridor, you will be ambushed from behind, so be prepared for it. Your progress should be slow but steady to avoid having anyone get ganged up on; even Edelgard won't be able to withstand everything if she's focus-fired. Eventually you will come within range of Constance, and she is not someone you will be able to tank easily, even with Linhardt. Make use of the various floor tiles to bolster your survivability, and target Constance with your bow users to take her out swiftly.

Finally, you will make your way up against Yuri, whose speed will let him outrun anyone in your party, even Byleth. It is best to bait him with Edelgard due to her high defense (even if she'll be unlikely to hit him), and then use Dimitri (who has Swordbreaker) to take him out. Once Yuri is down, victory is yours.