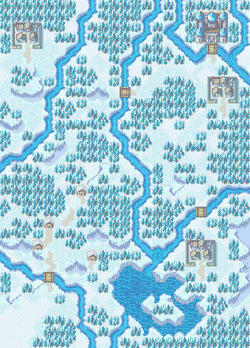 Chapter script
[view]
“After defeating Arcard, Roy moved east deep into the frozen lands of Ilia. Soon, they entered the thick forests that characterize Ilia's central land. However, a general of Bern, Bishop Martel, was waiting for them with an ancient spell that was said to have been lost centuries ago...”
—Opening Narration

The Frozen River (凍てつく河 Itetsuku kawa) is Chapter 18A of Fire Emblem: The Binding Blade if you take the Ilian route (which happens if by the end of Chapter 16, the experience points gained by Shanna and Thea were more than that of Sue and Sin).