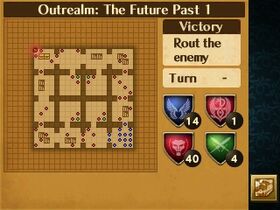 Rescue and Rout the Enemy

Chapter script
[view]
“In a future different to ours, the world has fallen into despair and the children's lives are endangered.”
—Opening Narration

The Future Past 1 (Future of Despair 1 in the Japanese version) is Xenologue 22 of Fire Emblem Awakening. This chapter takes place in the Alternate Plegia in the Outrealms. It was released May 9th, 2013.

This Xenologue, (like all Fire Emblem Awakening Xenologues) is only available as DLC from the Nintendo eShop. It can be purchased separately for $3.00 or as part of the Future Past Pack for $6.50 (which also includes The Future Past 2 and The Future Past 3). The overall pack has 139 blocks.

As far as this map specifically, it has 46 blocks and has a difficulty rating of four stars. It costs $3.00 by itself. This is the information that shows up on the DLC shop in the game itself. The description reads, "Rescue Cynthia, Kjelle, Noire, and Nah in this bleak tale from an alternate future."

In the alternate future, Cynthia, Kjelle, Noire, and Nah are trapped in separate prisons and attacked by Risen led by a Male Morgan. At least one of the four must survive the map. Rescue Staves do not work on this map.

All four girls' stats are calculated the same way as it was done in their recruitment chapters. Their skill inheritance works the same way, inheriting the last skill in their parent's skill banks, even if it's not the same one they inherited when they were recruited. If their mother's are not married, they will only carry the stat modifiers and skill from their mothers.

Each of the girls will have a special conversation with each of their parents if their parents end their turn next to them. The recruited versions of them will have a special internal monologue if they end their turns next to the NPC version of themselves. In order to view these conversations, the player must recruit their playable versions in the main game.

“Four children obtain Gules and Azure but are annihilated ere they can bear it home. Four more obtain Argent and Sable, only to expire in sight of their country's border. Three manage to successfully deliver Vert and the Emblem to the princess... But soon after, all three of them—as well as the princess—are slain.”
—Naga to Chrom in the opening

Naga summons Chrom and the Shepherds. She explains that she has discovered an Outrealm similar to Lucina's own future. The difference is: 12 children die attempting to recover the Fire Emblem and the Five Gemstones, and the world is destroyed with no one left to save it. Naga asks for Chrom's help to save this world, and the children, from a cruel fate, which he accepts.

Naga sends the Shepherd to a fort, where Cynthia, Kjelle, Noire, and Nah have managed to obtain Gules and Azure. Unfortunately, they are surrounded and cornered by Risen and their weapons have been taken, leaving them defenseless. All four have just about given up hope and prepared to say their final goodbyes. However, hope returns with the sudden appearance of their parents, or at least alternate versions of them. Joyful with a chance to see their parents once more and renewing hope that miracles can happen the four girls are successfully rescued and protected. After the battle, though the girls are saddened by the sudden departure of their parents after their short reunion, their spirits are higher than ever and they make haste to Ylisstol to deliver the Gemstones to Lucina.

Meanwhile back in Ylisstol, Tiki meets Lucina, saddened to report that Mount Prism has fallen to the Risen. Tiki is alarmed that Lucina has sent her friends out to search for the Gemstone and figures that Lucina wants to perform the Awakening Ceremony to end Grima. Knowing that only Exalted blood can perform the rite, Lucina is saddened by the fact that she cannot assist them or else risk their only chance of saving the world. Tiki offers to stay in Ylisse to help protect Lucina, but she senses an ill-presence and quickly pushes Lucina away, only for her to be stabbed by a mysterious figure.

It is best to hold off on this map until Sumia, Sully, Tharja, and Nowi all have achieved an S-Support and both the women and their husbands been sufficiently trained until they start to cap stats. Since none of the NPC children can attack, let them inherit passive and defensive skills like Counter, Pavise/Aegis, Weapon Breaker skills, and Quick Burn/Lucky Seven, anything to help them survive until you can get to them.

Without the boost from a Father, all of the children are extremely weak, even with the weak first tier enemies surrounding them. There are two Revenants attacking Nah, two Mercenaries attacking Noire, two Knights attacking Cynthia and two Barbarians attacking Kjelle. If their defensive stats are high enough, the only worry will be the promoted units outside their "prisons". On Normal difficulty, they won't be packing much skills; however on Hard and higher they'll have skills like Vengeance, Miracle, and Tomebreaker to discourage players from using Mire on them.

If it was just them, then the map would be a breeze, however the Risen outside of the prisons are all very strong promoted units, most of which will carry ranged weapons so they can attack through the walls. Noire and Nah will need to be rescued as soon as possible since they will most likely be the weakest out of the four. Kjelle and Cynthia should be fine until Sages approach them from the outside.

Make sure you leave a pair of units outside each of the children's sections, as enemy reinforcements will appear from specific stairwells as more turns pass. They only consist of the enemy units on the map. The only worries if the children are well protected are any Sorcerers that appear from the stairwells, as they all carry Mire and will usually target the weakest children first. There will also be the occasional Trickster with a Door Key along with other units at the stairwells, so you should kill them quickly before they can open the doors.

Enemy Male Morgan is a sorcerer packing Counter so if you plan on confronting him, attack from a distance. However if your Robin is married, have them end their turn next to him to make him leave the map, sparing yourself of an unnecessary battle. With careful planning and management along with proper preparation, this map should go somewhat smoothly.

If none of your units carries a Locktouch skill, or carries any Door Key items, then you can wait to turn 8 for the doors to open. Otherwise, you can have one of the Tricksters open the door for you. Despite this, it is advised to carry a unit with Locktouch or Chest/Master keys as there are two chests near the enemy Morgan which can be looted.