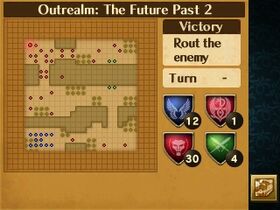 Rescue and Rout the Enemy

Chapter script
[view]
“In the future of despair, the children's misery knows no end. The children act as decoys, prepared to lose their lives, to allow their companions to escape.”
—Opening Narration

The Future Past 2 (Future of Despair 2 in the Japanese version) is Xenologue 23 of Fire Emblem Awakening. This chapter takes place in the Alternate Plegia in the Outrealms. It was released on May 16th, 2013, an exact seven days after the release of The Future Past 1.

This Xenologue, (like all Fire Emblem Awakening Xenologues) is only available as DLC from the Nintendo eShop. It can be purchased separately for $3.00 or as part of the Future Past Pack for $6.50 (which also includes The Future Past 1 and The Future Past 3). The overall pack has 139 blocks.

As for this map specifically, it has 46 blocks and has a difficulty rating of four stars. It costs $3.00 by itself. This is the information that shows up on the DLC shop in the game itself. The description reads, "Rescue Inigo, Owain, Brady, and Yarne in this bleak tale from an alternate future."

In the alternate future, Brady and Yarne make a hurried escape, with Inigo and Owain fighting as decoys. However, powerful enemies led by Female Morgan are approaching both the escapees and the decoys to kill them. All four must survive the map to see the ideal ending.

The Future Past 1 is not required to receive or play this episode.

Owain, Brady, Yarne, and Inigo have secured Sable and Argent. As they hurry back to Ylisse to deliver the Gemstone, Risen, led by Female Morgan, quickly flank them. Owain and Inigo send Brady and Yarne over a bridge and tell them to quickly return to Ylisse. Brady and Yarne urge them to cross the bridge before the Risen reach them, but Inigo cuts the bridge down. Planning to sacrifice themselves to ensure that the plan succeeds, Owain and Inigo prepare for one last stand and order Brady and Yarne to leave while they still can. As fate would have it, Naga has sent Chrom and his army to rescue the boys. During the battle, they meet their parents and find hope once more for a brighter future. After the battle, the boys share the first laugh they have had in a long time. With new vigor and hope, they make haste to Ylisse.

Back in Ylisstol, Tiki is gravely wounded. Lucina tries to attack the hooded figure, but they escape. Lucina tries to go off and grab a stave to save Tiki's life. However, she tells her to save the stave for others who need it. Lucina says that she didn’t have to take the blow meant for her. Tiki, however, tells her that she finally understands what it’s like to give her life for others and will now be able to join her long departed friends. With her dying breath she entrusts Lucina with the task of bringing the peace that Marth fought for.

The children will receive class skills based on the last skill in their parent's equipped skill slot.

Unlike The Future Past 1 this map is much easier to handle for several reasons. Still, like the last map, you should wait until Maribelle, Lissa, Panne, and Olivia have achieved an S-Support and have their stats and their husband’s stats capped. Their last skill will be the one that the children will inherit, so having defensive skills such as Renewal will help recover lost health from battles. Though Owain and Inigo are on opposite sides of the map, and they have weapons to defend themselves from the Risen near them, who are unpromoted and shouldn't be much of a challenge for the two. They will also not move from their spots for the duration of this chapter. However, Brady and Yarne don't have any items to defend themselves and there are at least two promoted Risen units which will quickly make short work of them if not killed.

North of the player's starting position are a large number of units, mainly cavalry and armored units. They'll start moving towards Brady and Yarne immediately, and will most likely kill them quickly if they manage to reach them. You should either have a flying unit with Iote's Shield or a strong ground unit paired up with a flying unit to make short work of them before they can get to them. The Risen chasing after them usually ignore your units and prioritize the two children first, so blocking the bridge they passed to block ground units is a good idea. However, the flying units that will appear in the later turns will be more of a threat, so prioritize any flyer with a ranged weapon over those that don't have one. If you are unable to kill the flying units in time, try to disband your Pair Ups to form a wall over Brady and Yarne, as they will be unable to reach them if done properly. Like in the last chapter, Galeforce is highly recommended to clear the enemies faster.

Once Brady and Yarne leave the map, the Risen chasing after them will begin to attack the players units instead. Since the requirement to win the chapter is to rout the enemy, kill all enemy units. However, the player can bring their Robin near Morgan (the enemy commander, not your own) to start a conversation, after which they will leave due to being unable to kill their friends. However, as Morgan is a Wyvern Lord, this can be quite tricky to accomplish due to the increased movement, unless the player has given their Robin some Boots, or has a spare Rally Movement/Heart user nearby. If you plan to kill Morgan instead, you will need to do so in one turn as she will use her Hauteclere to recover all her lost health.

Once all reinforcements have spawned, they, along with all remaining enemies will charge you.