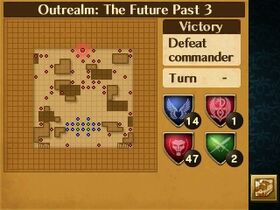 Chapter script
[view]
“The war in the future of despair has reached its final battle. Can the future of the children really be changed?”
—Opening Narration

This Xenologue, (like all Fire Emblem Awakening Xenologues,) is only available as DLC from the Nintendo eShop. It can be purchased separately for $3.00 or as part of the Future Past Pack for $6.50 (which also includes The Future Past 1 and The Future Past 2). The overall pack has 139 blocks.

As far as this map specifically, it requires 50 blocks of space and costs $3.00. It has a difficulty rating of five stars. It was released May 23rd, 2013. This the the word-for-word information that shows up on the DLC shop in the game itself. The description reads, "Rescue Lucina, Gerome, Severa, and Laurent in this bleak tale from an alternate future."

Lucina, Severa, Gerome, and Laurent are fighting, encamped by some stairs. Unfortunately a massive army of enemy units is quickly swarming the battlefield. To make things worse, they are led by Grima. The children need the help of Chrom and his army to survive. Only Lucina must survive to complete the episode, but the "best" ending only occurs if all four children survive.

The Future Past 1 and 2 are not required to receive or play this episode.

Chrom and his army are once again summoned to finish the task of saving the future of despair. Back in the alternate future, Lucina stands above Ylisstol as Severa, Laurent, and Gerome return with Vert and the Fire Emblem, but Grima appears and taunts Lucina. Lucina prepares to fight Grima, but he casts a spell, severely weakening the four children. However, before Grima can deal the final blow, Chrom and his army warp in, ready to put an end to Grima.

After weakening Grima enough, the Grima-possessed Robin regains enough control over their body and warps Chrom and his army out of their world, sending them back to Naga. Shocked, Naga realizes that the future Avatar warped them out to prevent them from getting killed. Tiki suddenly appears and tells Naga that she will become the new Naga of that world. With this new development, Naga assures Chrom that the future world will be saved and now leaves Chrom to save his own world.

Back at the tower, Robin pleads with the last bit of their strength to finish them off, but cannot fight off the control of Grima much longer and is consumed by Grima's will. Grima goads Lucina that their future is still doomed, however Cynthia, Noire, Kjelle, and Nah arrive with Argent and Sable. Inigo, Owain, Brady, and Yarne arrive next with Azure and Gules. With the Five Gemstones and the Fire Emblem, Lucina is ready to perform the Awakening. Grima reveals that the Divine Dragon has been dead for ages, rendering the Awakening ritual impossible. Tiki then appears and tells Lucina to begin the ritual. Due to Mount Prism falling to Risen, the rite can be performed in Ylisstol, as Tiki's body lays in Ylisstol, making it the holiest place in the realm. Lucina performs the rite and is recognized by Tiki, giving her the power to defeat Grima once and for all. Grima prepares to stop Lucina at all costs, however he is unable to do so because Robin, deep inside, is using all of their willpower to keep Grima at bay. Lucina deals the final blow and Grima dies. Robin thanks Lucina for ending all the suffering they've caused. With the Fell Dragon's destruction finally at an end, the 12 children celebrate their victory.

Several months after the final battle, the 12 children are hailed as Naga's 12 Heroes and saviors of the world. Many of their lives have changed. Noire has begun to make happiness charms with happy curses. Laurent has begun doing experiments and research. Kjelle and Owain have begun to recruit the new Shepherds. Inigo is a full fledged dancer and has Brady performing as his musician. Gerome has removed his mask permanently and has begun a Wyvern restoration project. Yarne has been recognized as an "endangered species" and is monitored 24/7 by conservationists. Nah has been hailed as the new Voice of Naga. Cynthia has revived the Pegasus Knight Squad and Severa is a fellow member. Finally, Lucina has become the new Exalt of Ylisse. Though happy to be reunited after a period of time, this moment is interrupted by some remaining Risen. The children decide to deal with this threat, but Severa tells Lucina to return to Ylisse as the ruler of the Halidom. Though she is disappointed, Severa reminds her that she has a role now, but she will accompany her back. Lucina looks up to the sky and wonders if Chrom can see the new joys of the world and thanks him for giving her strength. Chrom, from the afterlife, joyfully agrees that the world is as it should be and asks Robin if they think so too, which they agree, now at peace from the grip of the Fell Dragon.

Out of the three chapters in the "Future Past" series, this is undoubtedly the hardest. Like the past two episodes, it is best to wait until Chrom, Cordelia, Miriel, and Cherche have all been married and that each couple has capped stats. For this map, bring your best units, make sure that their weapon ranks are all A's, and strap on your best Regalia and forged weapons. Since the children don't initiate attacks, give them passive, defensive, or regenerative skills just like in the previous maps. The main objective is to defeat Grima; once he falls, the map will be cleared. Of course, you will need to protect the four children as well to get the full ending of the chapter.

Lucina, Gerome, Severa, and Laurent will start the battle with 1 HP, but your units will appear after this hit and will start at full health. First and foremost, get them healed with a good Fortify staff healer, then eliminate the Generals and any units within the children's range. Otherwise, surround and protect them—especially Lucina—until you can safely move your units away without leaving the children vulnerable. The NPC children will quickly make their way to the stairs at the southeast and southwest portions of the map, and will remain there for the rest of the battle. All four will not initiate attacks, but will counter-attack. Keeping NPC Lucina alive is a priority above all else because if she dies, it will result in a game over so take time to heal her whenever she is damaged. The other three do not need to survive the map in order for it to be completed, however, for the "best" ending, they need to be alive at the end of the Xenologue.

The map is pretty small and there are a lot of units. The same spawning points from the Final Chapter appear, and spawn endless waves of units. You will need to be a bit aggressive, but not too reckless, when dealing with them. The biggest threats are the flying units since they can bypass your efforts to corral the enemy away from the children. Eliminate these as soon as possible. Galeforce units are an invaluable asset for this map, as they can help control and whittle down enemy numbers, or quickly dispatch enemies swarming on the children, especially during the initial turns. Use any skill that can improve your odds of advancing your units or defeating the enemy. With good planning, you should be able to approach Grima in about 3 or 4 turns on Normal and Hard. Lunatic and Lunatic+ generally takes at least 5 to 7 turns.

Grima is a little different from his Final Chapter form as his skillset has changed dramatically in all modes. In Normal Mode, his Anathema skill has been replaced with the Aegis and Hawkeye skills. He also gains a decent boost in stats, effectively making him tougher than the Grima fought in the Final Chapter. In Hard Mode, he gains Pavise, much like in his Final Chapter form. Lunatic Mode grants him Rightful God, which basically halves all damage against him on top of the damage halving from his Dragonskin. Lunatic+ Mode upgrades both his Pavise and Aegis skills to their higher versions. Although this does make it nearly impossible to kill Grima outright, it does render his Rightful God ability worthless.

Like the other two Future Past chapters, all enemies have at least one skill. On Hard and higher, they gain forged weapons and additional skills. In addition, there are much more enemies on the map.