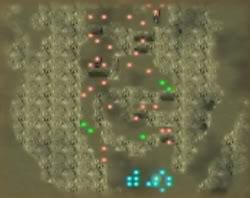 Chapter script
[view]
“The Laguz Alliance, bolstered by the hawk tribe and by Soren's tactical genius, thunders across the Begnion-held river. Emboldened by their success, they move east with amazing speed and capture the northern stronghold, Castle Seliora. The Laguz Alliance has made a vital step in its march toward the Begnion capital, Sienne. Begnion has now lost a valuable defensive line in the Ribahn River, and the Central Army has been forced to retreat east, taking refuge in Castle Gaddos. The morale of the Begnion soldiers is kept high by their faith in General Zelgius, while the Begnion nobles smolder with resentment at their defeat.”
—Opening narration

The General's Hand (名将の一手 Meishō no ite) is the chapter 3-4 of Fire Emblem: Radiant Dawn.

Retrieved from "https://fireemblem.fandom.com/wiki/The_General%27s_Hand?oldid=510397"
Community content is available under CC-BY-SA unless otherwise noted.