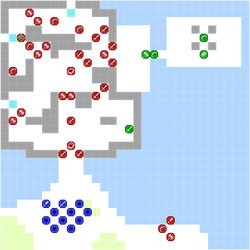 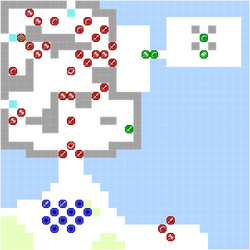 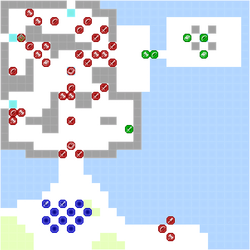 Chapter script
[view]
“Having allowed the Imperial army to invade, the Alliance makes their last stand at the center of House Riegan territory in Derdriu. The Kingdom army rushes to their aid after amassing more troops.”
—Opening narration

The primary objective in this mission is to defeat the enemy's commander, Lord Arundel, a powerful Dark Knight. Though straightforward, the player is additionally incentivized to protect Claude and Judith. Claude will remain still in the corner of the map, protected by an axe wielder and a Sniper covering the small bridge, as well as a Priest capable of using Physic. Judith, on the other hand, is entirely alone in an isolated corner of the city, surrounded by enemies and determined to reach Claude. While she is a capable fighter with excellent stats, and her Rapier allows her to meaningfully engage with the Fortress Knights and Paladins the enemy has fielded, the sheer volume of an enemy attack she faces if left alone may prove problematic.

As something of a side objective, three enemies hide in the lower right corner, offscreen from the starting position and far enough away that player units start outside of their attack range and are unlikely to enter it. Though the two Paladins are idle if left alone, the Pegasus Knight will begin flying north. Claude identifies them as the Imperial Supply Corps, and accordingly, they carry treasure that drops when they are defeated.

It may seem tempting to rush units to protect Claude, but his position is surprisingly well fortified. The enemy force has exactly one flying unit, making it necessary for them to advance via the narrow bridge. Presumably, Hilda is the axe fighter here if she has not been recruited; if she is among your forces, she is bizarrely replaced by a female War Master. Either has exceptional combat stats and a high crit rate that makes them a menace to the enemy swordfighters they face at first. Further, the enemy forces seem to prioritize the repeated use of Gambits to lock down her movement, often dealing no damage and ironically making it impossible for them to reach their objective. The allied Bishop's use of Physic will keep the bridge team going strong as long as they survive the enemy turn. For the initial turns, this position is secure; it is best to focus on protecting Judith and thinning the enemy forces.

The player will be notified of Judith's status twice. When she first comes under attack, you will be reminded to ensure she survives; afterward, once the initial wave of enemies in the southern area of the city is defeated, she will note their defeat and continue advancing northwest towards Claude's position. At this point, Arundel will break formation and his forces will begin marching east towards Claude, engaging forces they encounter along the way. Because Judith is outside of the player's control, this mission can advance at a pace that may leave the player behind.

From the second turn, reinforcements will spawn continuously from the three gates at the north and west edges of the city. These gates can be captured by placing units on top of the highlighted squares in front of them; though there is no notification or dialogue, the highlight will disappear. However, it's likely that Arundel will begin moving just as the player advances into the middle of the city, effectively jumping the mission-ending objective directly in front of the player's forces before it is possible to even reach the second or third gate.

Arundel is a bog-standard Dark Knight. While he has exceptional mobility as a mounted unit and deals enough damage to one-shot most units, none of his attacks have greater than 3 range, giving Snipers and Bow Knights impunity when attacking him. If attacked cautiously but proactively, preventing him from using his superior mobility to choose his targets and tear apart your back lines, Arundel is not much of a challenge. Additionally, Arundel only has four charges of Death Γ and one Gambit charge, so once he uses those up he becomes utterly harmless; one could use a high Resistance character to sponge the attacks or get someone with high Avoid to bait them.

Notably, all of the Golden Deer students have a special dialogue with Claude if they are deployed in this mission and manage to reach him, making it tempting to ignore the objective in favor of a reunion with their former house leader.