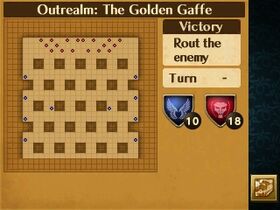 Chapter script
[view]
“Gold—a fiendish brilliance that tempts people. A theft occurs in the military base and Lissa's secret savings have been snatched by the Risen. Although reluctant, Chrom marches into the enemy base to recover Lissa's cash...”
—Opening Narration

The Golden Gaffe (Gold and Silver in the Japanese version) is Xenologue 13 of Fire Emblem Awakening. This chapter takes place in the Outrealms.

Chrom faces a legion of gold-carrying Risen who are only interested in escaping the map from the south. They will not attack Chrom's army but will retaliate when attacked.

The amount of gold each Risen carries ranges from 1,000 to 7,000 gold, which varies depending on the difficulty of the Risen. The skills they have will also vary, and are shown below:

Regardless of difficulty, all enemy units carry Pass. Players will only face Thieves, Barbarians, Dark Mages, Tricksters, Berserkers and Sorcerers in this Xenologue. All enemy units will leave the map by turn 7.

A script of the script can be found here.

“There's been a theft in the barracks! Lissa's secret savings have been snatched by thieves, and Chrom has decided to pursue them.”
—Website Opening Narration
“The gold's all yours...if you've got the guts to take it.”
—North America eShop Opening Narration