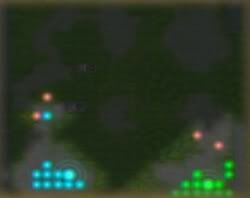 Chapter script
[view]
“Three years ago, Crimea freed itself from Daein tyranny. Its nobles used that freedom to berate the queen and scrabble for power. Disgusted with their greed and arrogance, Ike and the Greil Mercenaries left the court behind and returned to work. Thanks to their efforts and to Queen Elincia's even-handed rule, Crimea has avoided a bloody civil war. Before departing the capital once again, Ike receives disquieting news from Queen Elincia. The Black Knight, the man who murdered Ike's father, has once again been seen in Daein. The queen's words hang heavy over Ike as he leads the mercenary group back to their headquarters.”
—Opening Narration

The Great Advance (大進攻 Dai shinkō) is the prologue of Part 3 in Fire Emblem: Radiant Dawn, the first chapter where you play as the Greil Mercenaries.

This victory is rather unusual because, unlike other siege missions, Skrimir, who is an Other unit, must be protected until he reaches the designated square: if he gets killed, you will lose the battle. The same happens if Ranulf dies.