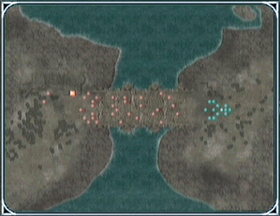 Chapter script
[view]
“The information gathered at Palmeni Temple leads Ike ever closer to the hidden truths behind the war. The assassination of Begnion's former apostle led to the massacre of Serenes. A Serenes princess was kidnapped. The medallion is stolen. A complex skein seemed to connect these events, and now those threads have become clearer and cleaner. Ashnard's motives are still a mystery, but his silhouette lurks in the shadows of all that happens. Ike returns from the temple and renounces all rights to the rule of Daein. Those rights are then passed through General Zelgius of Begnion to the apostle herself. The Crimean army absorbs another troop from Begnion, and with its might increased, marches on the Daein/Crimean border. Its next goal is the Riven Bridge, a massive structure that connects the two countries.”
—Opening Narration

The Great Bridge is Chapter 23 of Fire Emblem: Path of Radiance.

Be sure to leave a couple of units behind to fend off the forces from behind, Jill in particular, so she can speak to Haar. If she has not been trained, be sure she can get out of enemy range ASAP after talking to Haar. It is ideal to not bring weaker units like Reyson into this fight, as they will be shot down by ballistas. While you can gain control of the ballistas, they are not that useful, since the enemies in range are probably already dead. Be sure to have your strongest units in the fray, but do not forget that there are traps in the bridge that can stun units that fall into them for one turn. Be sure you have Marcia or Tanith armed with the Full Guard so which either one taken can kill the enemies ahead before your other troops are hammered down by the pitfall traps.

Once you reach Petrine, it is ideal to have a Sage take her down, since her weapon uses magic for attacks. Also, be sure to send some axe or bow users immediately head to the left to help the neutral Crimean Army take out the Wyverns. Follow these tips, and you should be fine.

If you are having a lot of trouble with the ballistas, try using a General with Provoke (or even Shinon for it if you have no other Provoke characters or scrolls). The ballistas will almost always attack the Provoke character, allowing your other units who may be weak to its attacks to freely mow down the enemies (just watch the ballista range so you don't advance too far in front of your Provoke unit). The Pegasus Knights Tanith can call are also optimal fodder for the ballistas: since they are weak to arrows, they are the most likely targets of the ballistas, hence giving your units a lot more breathing room.

Map presents every pit on map