View source
“But we do make mistakes... Sometimes we make terrible mistakes. Sometimes all it takes is one emotional outburst and the entire world is drowning underwater!”
—Yune talking to Sanaki about The Great Flood

The Great Flood is an event that was mentioned in Fire Emblem: Radiant Dawn.

Long ago, there was a goddess who was all alone in a world growing up around her, for she was one of a kind and no one could share the same sentience as her. But as though to dissuade her sorrows, the creatures around this lonely goddess began to evolve. They are known today as the Zunanma (known in Japanese FE as mannaz, a type of futhark rune). The Zunanma happily accompanied their goddess, whose hair was the color of the rising dawn. They dubbed her Ashunera, the Dawn Goddess.

Soon their attention strayed from her. They began to evolve separately and developed desires. These desires drove them to fight against one another. They fought for power, they fought for honor. But still lives were lost, and Ashunera despaired. She hoped to quell the bloodbath by giving the deviated Zunanma different names; from then there were Beorc and Laguz (both being names from futhark runes).

They only fought more. Parted now by different names, they were not one people, but many. The beorc and laguz warred, deaf to the desperate wishes of their Mother and Creator. Aggrieved, Ashunera's emotions erupted into a torrent that wiped out much of the land. This was called The Great Flood. The pain and strife of many were obliterated by the waves of a crying goddess. Only a lonely continent remained: Tellius.

Further aggrieved by what she had done, Ashunera split apart into two entities: Ashera, a goddess of order and intelligence, and Yune, goddess of chaos and emotion. Yune was a naive entity whose emotions were uncontrollable. Ashera appointed heroes, later called Ashera's Three Heroes, to keep her in check. Finally, Ashera judged it best to eliminate Yune. But her heroes pleaded with her to reconsider. Instead, Yune would be imprisoned in a medallion, entrusted to Lehran's care. The heroes then sealed a covenant with Ashera: beorc and laguz would not war for a thousand years. 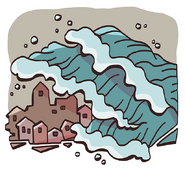 The Great Flood as depicted in the Fire Emblem Heroes guide.