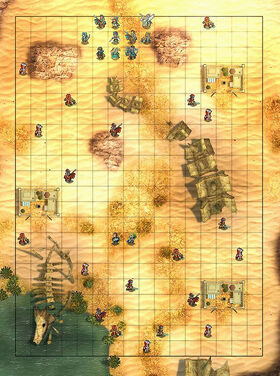 Chapter script
[view]
“Chrom and Lissa learn their sister is to be put to death, and launch a rescue mission. On the way, they battle the Grimleal: the fell dragon's loyal followers.”
—Opening Narration

The Grimleal (Servant of the Evil Dragon in the Japanese version) is Chapter 8 of Fire Emblem Awakening.

The villages here offer these items:

This is the first chapter where terrain will really affect how you will manoeuvre your units around the map.  All units will suffer a movement penalty with the exception of mages and fliers.  Mounted units will suffer a tremendous movement penalty.  Luckily, the terrain also affects the enemies so take note of the mages because there are no fliers, and then prioritize killing them first.

You will immediately notice Gregor and Nowi appear around the middle of the map.  They are out of range of a rescue staff, but if Gregor pairs up with Nowi, she can move north to a space where no enemies can attack them.  Next turn, move the pair north more until they join your army and can be used strategically.

Work your way south slowly, making sure to visit all 3 villages since they offer extremely useful items.  Take out the cavaliers, myrmidons, dark mages, and barbarians that have brought the fight to you by using mages and flyers to carry the stronger units.  Once all these enemies are dispatched, that leaves the slew of enemies surrounding the boss.  There's a dark mage with a wind tome so be careful how you deal with that one, but otherwise just kill the myrmidons and barbarian.  Note that one myrmidon has a killing edge which gives the enemy a high chance of pulling a critical hit.  It's best to take this enemy down with a ranged attack.

Finally, kill the boss.  He doesn't move at all so face him when you're ready and after you've collected all the treasure from the villages.  Be aware that the boss wields a nosferatu tome.  This allows him to heal himself by half of the damage he dealt to you.  To counter this, have a unit wait in his attack range and then they'll attack the boss by counterattacking.  On the next player phase, use all your units to finish off the boss.