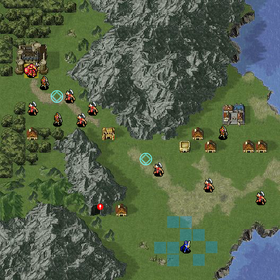 Lorenz (although not fought)

Chapter script
[view]
“Once, there was a war known as the “War of the Shadows,” An epic battle between Prince Marth’s heroes and the Dolhr Empire, which ended with the defeat of the Earth Dragon King, Medeus. The warriors who had united under the Fire Emblem returned to their own lands, devoting themselves to the reconstruction of their homelands. Among the nations that made up the “Seven Kingdoms of Archanea”, Gra and Grust were devastated. Altea, Aurelis, Macedon, and Talys were left deeply scarred, and even the mighty Kingdom of Archanea was undergoing restoration. However, in the palace still shaken by war, one important event took place. Hardin, the younger brother of King Aurelis, was married to Princess Nyna, becoming the twenty-fourth king of House Archanea. After ascending the throne, Hardin aggressively restored the country in the twinkling of an eye, and formed a powerful army by gathering many soldiers. He then proclaimed the restoration of the Holy Archanean Empire, and himself Emperor. One year has passed since the war with Dolhr. The world seemed to be moving towards an era of peace. However, unbeknownst to man, the cogs of destiny had started spiraling out of order. It has been a year since the War of Shadows ended. The war-ravaged kingdom of Altea was finally starting to regain stability thanks to Prince Marth’s efforts. Prince Marth’s engagement to Princess Caeda was announced, and the people of Altea rejoiced, sharing their happiness. However… nearing the day of their wedding, an unexpected letter arrived from the imperial palace, containing an imperial edict. "Dear Prince Marth of Altea, In the Kingdom of Grust, now under imperial rule, a large-scale rebellion has broken out. I request your kingdom’s assistance in its subjugation. Your Highness is to lead the entire army of Altea and sortie at once, suppressing the Grustian rebellion.-The Emperor of Archanea" The Kingdom of Archanea was Altea’s suzerain, so its orders were absolute. Forced to comply, Marth ordered the knight Cain to protect his homeland, and together with Jagen, the paladin Arran, and the young, newly appointed knights, left Altea on the Grustian expedition.”
—Opening Narration, New Mystery of the Emblem
“One year has passed since the War of Darkness ended. Thanks to the efforts of Prince Marth, the Kingdom of Aritia, devastated by war, finally begins to stabilize. The knight Jeigan, who succeeded the ill Morodof, became the prince's tactician and helped him rule the country, by his side. Afterwards, Princess Sheeda was welcomed to Aritia, and her marriage with Prince Marth was announced. The citizens were happy for the pair's fortune and Sheeda was passionately welcomed to the country. However... Nearing the day of the wedding, a letter suddenly comes from the imperial palace of Pales, containing an imperial order. Dear Prince Marth of Aritia, At the Kingdom of Grunia, occupied by Akaneia, a huge rebellion has broken out. I request for your country to subdue Grunia. Your highness, please send Aritia's full army immediately, to quell Grunia's rebellion. -Emperor Hardin. The Kingdom of Akaneia is the suzerain state to Aritia, and its orders must be followed. The helpless Marth orders the knight Kain to protect his kingdom. And he leaves, along with Jeigan and the others, to an expedition to Grunia.”
—Opening Narration, Mystery of the Emblem

The Grustian Expedition is Chapter 1 in Book 2 of Fire Emblem: Mystery of the Emblem and its remake.

In the remake, any characters recruited in the prolouge are "Reset", meaning that only specific Characters are with Marth at the start of the chapter. The characters retained are listed above.

In Fire Emblem Awakening, this map reappears once more in Paralogue 18: The Dead King's Lament, where the former capital has become a pirates' den, now referred to as the Sea-King's Throne. 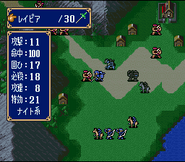