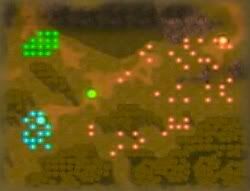 Chapter script
[view]
“After Elincia's meeting with Valtome, the Crimean Royal Knights return to the capital of Melior, leaving the border villages between Crimea and Gallia completely undefended. The Begnion Central Army crosses the border once more, but Crimea makes no move to march against it. Valtome sees this inaction as a sign of Crimea's capitulation to Begnion's demands. The Begnion forces occupy the Crimean castles and forts on the border with Gallia and prepare to launch their attack. The Laguz Alliance finally makes its way back to Gallia, but word of Begnion's approach allows them no time for rest. The news that Gallia's ally, Crimea, has allowed Begnion to travel through its lands comes as a great blow to the Laguz Alliance.”
—Opening Narration

The Heart of Crimea is Chapter 3-10 of Fire Emblem: Radiant Dawn. The chapter takes place in a relatively large map with Ike and the Greil Mercenaries starting southwest, the Crimean Royal Knights northwest, Begnion's troops mainly in northeast and an unarmed Queen Elincia in the center of the map.

This is considered a slightly difficult chapter because of the Royal Knights being controlled by the computer and the fact that Elincia is unarmed, and is therefore unable to perform basic actions such as attacking and healing as well as her tendency to fly right towards to the bow-wielders near the boss. While Lucia fights in the chapter after Part 2, she cannot be legitimately controlled.

Before the chapter, the Laguz Alliance arrives in Gallia after a long march through the Kauku Caves and Goldoa. Meanwhile, Valtome of the Begnion Senate takes command of the Begnion Central Army and asks for supplies and troops from Crimea. When Queen Elincia refuses, Valtome orders his troops to take whatever they need anyway. The Crimean Royal Knights move and defeat Begnion's troops in a countryside town. At the helm of the forces attacking Elincia is Sergei, one of Valtome's officers.

Before battle, Queen Elincia says Crimea will still remain neutral and leaves her sword Amiti on the ground. General Zelgius sees this as an act of nobility and orders most of the troops to retreat. However, Valtome stays with mainly cavalry units.

(note: the following is subjective and based on previous experience)

The battle begins with the Royal Knights in the northwest corner of the map and your Greil Mercenaries in the southwest. Begnion has concetrated most of their forces in the northeast corner, but units are spread throughout the map. Specifically, several units are positioned to your right flank and several cavilers in the center are threatening Elincia. Once the level begins, Elincia will retreat west and the Crimeans will advance forward towards her. Begnion units will begin charging both on your flank and towards the center plain of the map. Allied units (except Elincia) will retreat if defeated, instead of dying permanently.

Start by blocking the units to your right and advancing towards the center of the map, to reinforce the Crimeans. They will advance with usual AI-controlled recklessness, so reaching them is important to protect the queen. Begnion cavalry will enter the map from the south, to your rear, so ensure at least one frontline unit tails your forces to protect your non-physical units.

Once they reach the queen, the Crimeans will surround Elinica and remain in place, while the Begnion forces charge down the hill towards them. Sergei and company will also move towards the queen after turn 6, so ensure the Crimeans have proper support to withstand the attack. Overall, the chapter is relatively simple as long as the Crimeans receive enough support. The Begnion forces will rush quickly enough into your defensive wall to make short work of routing them.