The Hero of the Western Isles

The Hero of the Western Isles 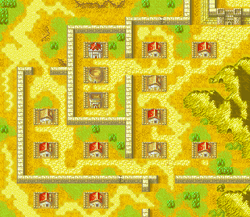 Chapter script
[view]
“Roy was shocked by Larum's story. He quickly penned off a letter to Cecilia letting her know of the horrors happening on the Western Isles, and his chosen course of action. After sending the letter, Roy led his forces towards Mt Ebrakhm to try and free the people suffering from forced labor. Etruria had assigned Bishop Oro of the Elimine Church to supervise the mine. A fortune's worth of minerals had already been taken from the mine, but it seems Etruria's greed knew no bounds...Ebrakhm...the Mine of Death. The desperate wails of the people forced into labor echoed through the mines like the howling of ghosts...”
—Opening Narration

The Hero of the Western Isles (西方の勇者 Seihō no yūsha) is Chapter 11A of Fire Emblem: The Binding Blade if you visited the left of two villages back in Chapter 9: The Misty Isles.

For the best reward for completing this chapter

It is possible to save all of the villages, Klein's units, and Thea's units all at the same time. That being said, this is mostly based on your luck with aIl of Klein's and Thea's units, so it can be difficult.

You will want two forces: one made of Cavaliers escorting Clarine through the immediate entrance and a second that can be made of Shanna and Swordsmen (which you will ferry across the wall to face the northern horde of units) or Archers and Nomads so they can rush to the cracked wall in the north and more safely deal with said horde.

When Klein's units arrive, get Clarine into his range and talk to him (it may require several tries depending on your luck. Sometimes, Klein will not move away from his starting position). You can then move Klein to visit the southeast village, stopping the southeast bandit from sacking it. However, you will need your Cavaliers to head to the center village, so that the Bandit will not be able to get this one either.

Echidna comes in a turn after Thea. When that happens, be sure to have some of your characters kill the Fighters and rescue her as soon as possible (you don't want her to go on a rampage killing Thea and her units) and get her into Larum's range. Have Larum talk to her.

On hard mode, Echidna's steel axe hinders her so much that she could very well get killed by the three fighters, and will not survive the force of fighters to the north, requiring you to dispatch them quickly.

Cavaliers will spawn where your units started and should attack southwards if most of your units are located at the southeast corner and if you did not destroy the wall. This strategy has an additional problem on Hard Mode, as there will be a second group with a paladin, Robarts, which will come into the field from Klein's starting point after the first group of cavaliers enter and both forces will be near each other in the south.

If you did destroy the wall, the cavaliers that spawn first, where your units started, will take the northern route, entering through the cracked wall and will therefore be separated from Robarts' force when both are on the map.

Lastly, it's important to the note that, with the exception of Thea, Klein, and the 3 Axe men surrounding Echidna, killing the boss stops all reinforcements from spawning on Normal Mode except bandits.

On hard mode, the bandits will still spawn, but it will take them a much longer time to do so.