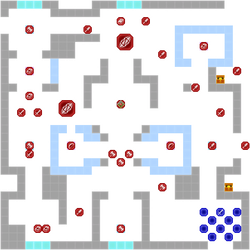 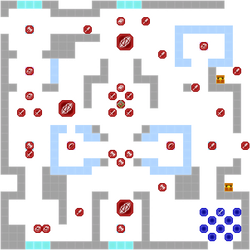 Chapter script
[view]
“After seizing the Great Bridge of Myrddin, the resistance army starts making preparations to invade Imperial territory, when a surprising piece of information comes to light.”

A Church soldier reports that Imperial, Kingdom, and Alliance forces had a massive battle at Gronder Field; Edelgard was badly injured and forced to retreat to Enbarr, Dimitri is dead, and Claude is missing. Despite his shock at these events, Seteth elects to take advantage of the damage done to the Imperial army to launch the Resistance's own invasion of Adrestia, using Fort Merceus as a foothold. Flayn also notes that Faerghus and Leicester are likely in disarray due to the loss of their leaders, and Seteth notes that Byleth will have to unite them under one union. Afterwards, Byleth wanders outside the monastery and seemingly encounters Dimitri, who laments his own actions up to this point. Seteth appears, berates Byleth for falling asleep in such a place, and denies seeing Dimitri.

At the end of the month, the Resistance infiltrates Fort Merceus using stolen Imperial uniforms. They conquer the fortress and defeat the fortress' commander, the Death Knight, who beckons them to pursue him as he escapes. He warns the Resistance to flee before they are all killed and escapes just as modern-day ballistic missiles obliterate Fort Merceus. The shocked and demoralized Resistance forces retreat to Myrddin, where Byleth and Seteth decide to infiltrate Enbarr and gamble everything on an all-or-nothing attack on the palace.

There are a total of 2 ballistas and 2 Fire Orbs on this map, with the use of the Gautier Knight (or another battalion with Stride), the ballistas in the southern part of the map can be cleared in 2-3 turns. Enemy reinforcements will continue to spawn untill one of your units ends their turn in one of the associated tiles. It is therefore recommended to focus on stopping the enemy reinforcements as soon as possible.
You can either split up your army in 2, with one part going to the 2 northern spawn areas and the other part going West to those 2 spawn areas, or you can move your army as a single group clockwise across the map to all 4 spawn areas in a row.
Once the rest of the enemys has been cleared , a good gambit can be used to immobilize the units near the Death Knight, while he himself can, as usually, be taken out by a single Dark Spikes from Lysithea or another Black Magic user.
Note: After a certain number of turns (M:7), or after killing the Fire Orb user in the NE, the Death Knight will run away to the Nort-West of the map. If he manages to leave the map, it then turns into a regular Route the Enemy map. If you require another Dark Seal, you will therefore either have to either nuke the Dark Knight with Lysithea (or another Black Magic user) on turn 2-3, of make sure she is well positioned to intercept him when he tries to leave.