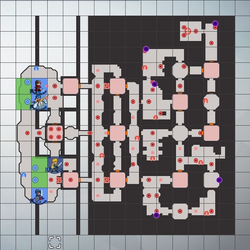 Seize the Castle Tower and defeat the Monster and Manaketes.

With the swords Enliron and Facinna in hand, the twins' determination to rescue Darios and retrieve the Pedestal of Flames Shield of Flames is renewed. The party again makes its way to the Fortified Citadel.

Defeat the Manaketes and the Monster!