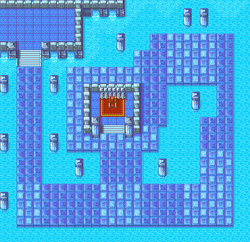 Chapter script
[view]
“An ancient temple stood on the outskirts of Arcadia. One of the Divine Weapons was said to be hidden in its depths. In an attempt to recover the Divine Weapon before Bern got their hands on it, Roy carefully set foot in the temple...”
—Opening Narration

The Infernal Element (業火の理 Gōka no Kotowari lit. The Reason of Hellfire) is Chapter 14x of Fire Emblem: The Binding Blade.