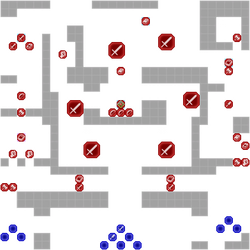 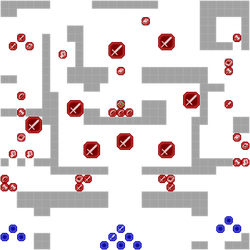 Byleth, Dimitri and 10 others

Chapter script
[view]
“Despite their victory at the Battle of Gronder, the Kingdom army turns around and marches for Fhirdiad instead of heading south. To hail the arrival of the Kingdom army, the people of Fhirdiad begin to rebel. No move is made to suppress them. Instead, Cornelia directs her borrowed Imperial troops to prevent Dimitri from reaching the Kingdom capital.”
—Opening narration

Dimitri and his army go to reclaim Fhirdiad from Cornelia, who doesn't give it up without a fight. After defeating Cornelia in combat, she tells Dimitri about how his stepmother never really loved him and that she was the one who orchestrated the Tragedy of Duscur in order to see her daughter again. After her death, Gilbert and Byleth get Dimitri to meet his people, and to his surprise, they cheer for his return. After much celebration from the people of Fhirdiad for their liberation, Dimitri and Byleth go take a break where Dimitri reflects on how Byleth helped him return to sanity. Amidst their discussion, a Kingdom soldier alerts them that Claude sent an express messenger to request for aid, as the Imperial Army is headed towards Derdriu and he sorely needs the help. Dimitri wonders what Claude could be after and decides to help him.

This map can be methodically approached without the need to do a lucky Warp+Dimitri Crest Activating Combat Art combo. It is recommended to do so to obtain the necessary experience to prepare for later battles that will only increase in difficulty.

Our objectives are to safely eliminate enemies on the far east and west paths, have the east squad deactivate the long-range Viskam turrets by reaching the lever to the far northeast, obtain the Tathlum Bow, and defeat Cornelia while maximizing the amount of experience and ability points earned.

Your team is split into three squads to the southwest, south, and southeast. Even with strong characters in your central group, the amount of hard hitting enemies with strong magic and abilities like Quick Reposte will make it difficult to head directly north towards Cornelia and the Titanus demonic beasts have a tendency to clog up the middle path. Additionally, we do not want to use up all of our gambits so quickly at the beginning of the battle dealing with high speed and HP enemies.

Your southwest squad should consist of stronger physical defense characters along with an additional healer who has the second Stride gambit (think Seteth, Gilbert, and Flayn). The southeast squad will consist of a high avoid character with your main healer and your strongest mage (Ingrid, Mercedes, and Annette). Annette or Mercedes should have the Retribution gambit equipped.

That leaves your central team consisting of your tank (Dedue), your two strongest characters (Byleth and Dimitri), Felix, Sylvain, and Ashe. If Sylvain has high enough authority, his Gautier Knights Stride gambit is an excellent fit for this battle and Dedue should have Impregnable Wall.

When the battle begins, have your central squad character use Stride and send one additional character to your east and west squads, leaving you with four characters in the central squad. The central squad will work on eliminating the four Swordmasters and two Warlocks in the middle by aggroing them to one or two characters that have Impregnable Wall active during Turn 1. It may take two or three turns to eliminate this group of enemies so don’t be afraid to have a high hit gambit character (like Byleth) use a gambit to immobilize some of the squad during Turn 2. You can use Impregnable Wall a second time if needed as well. Beware the extended range of the Titanus when doing this as they have a high critical hit rate. Use your movement combat arts as needed to have proper positioning while doing this.

Meanwhile, have your high avoid character in the southeast aggro the Grappler and other nearby enemies then eliminate them safely during turns 2-3. If you have been developing Mercedes’s bow skills, she can be straight up deadly with the Magic Bow+ and if needed, the Curved Shot Combat Art when attacking the eastern group.

Your southwest group will do the same but beware the magical turret a little bit north of your squad. Having a second high avoid character with your southwest group can make aggroing these enemies easier or if you have been developing Gilbert into another tank and he has abilities like Pavise, Aegis and Defiant Defense, he should be able to handle this.

Around Turn 4, Cornelia will activate the Viskam. The turrets are more annoying than deadly although low resistance characters like Dedue can take quite a hit from them.

When your central group is done vanquishing the Swordmasters and Warlocks, split the group into two and have one join the east squad and the other join the west. For the southwest group, have a character use a double attack (Seteth with Swift Strikes, Felix with gauntlets or a Brave Sword) take out the enemy at the magical turret and have Flayn use Rescue to pull them back into safety. Further north from the southeast group you will notice a mage with Meteor. Use the Retribution gambit on your mage killer (likely Ingrid) and if they have enough speed, they will counter this spell with a double attack and take out this mage for good.

At this point, your biggest threats left are the Sniper and a Titanus to the west and two Fortress Knights to the northeast along with the annoying Viskam. As soon as the Meteor mage the east is dealt with send your eastern squad to the north to defeat the Fortress Knights and deactivate the Viskam with the lever. The Sniper on the western side can be taken out by anyone and the saved with the Rescue spell if needed. If you’re using a flier to take out the Sniper, don’t forget to use the Dismount command if you aren’t strong enough to defeat the Sniper and avoid certain death from a bow attack. Fighting a Titanus isn’t much different than fighting demonic beasts but they do have a higher critical hit rate. Keep this in mind when attacking the Titanus (low Luck personnel beware).

Once this sequence is finished, use your team to mop up the enemies and Titanus in the northern part of the map.

It is time to obtain the Tathlum Bow. There is some confusion as to how exactly to get the enemy carrying the bow to appear. In the northern part of the map, there are a row buildings on the left side but not the right (in the shape of an L). Three of these buildings in the middle have a little patio/yard that you can move to. Have any member of your team move to the northernmost yard and a Sniper will appear to the southwest of the map carrying the bow. If you don’t have anyone nearby to kill the Sniper, use Divine Pulse, move two or three characters to the area, then repeat this process.

It’s time to approach Cornelia but before you do, you will have to deal with three Snipers equipped with Longbows who all will use the Deadeye Combat Art. Additionally, Cornelia has an attack range of three, a high critical hit rate, and a unique magic staff that cannot be stolen. Aggro the Snipers towards any tanks (use Impregnable Wall if needed) then finish them off during the next turn. After this, you can use gambits, your mage killer, and Combat Arts like Windsweep and Atrocity to finish off Cornelia.

There is no turn limit or reinforcements to worry about with this map. Take your time and be safe in your approach.