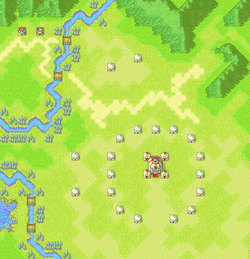 Chapter script
[view]
“After defeating Arcard, Roy crossed the border and entered the land of Sacae. The Djute clan, the most powerful clan in Sacae, had joined Bern after suffering defeat. Not standing a chance against the joint force, the other clans were quickly decimated. Although Dayan, the chief of the Kutolah clan known as the "Silver Wolf," was fighting back with guerilla tactics, the situation looked grim. Sacae had become a territory of Bern. As Roy entered the plains of Sacae, the warriors of the Djute clan stood in his path.”
—Opening Narration

The Laws of Sacae (サカの掟, lit. Law of Sacae) is Chapter 18B of Fire Emblem: The Binding Blade if you take the Sacaen route (which happens if by the end of Chapter 16, the experience points gained by Sue and Sin were more than or equal to that of Shanna and Thea).

Inside the houses in this chapter, the villagers all just talk about the 'Law of Sacae'. The houses surrounding the gate cannot be visited, but rather serve as potential spawns for reinforcements. On every turn player units are left inside the area enclosed by the houses 0-4 Nomads/Nomadic Troopers will spawn from random houses surrounding the gate. These reinforcements will spawn even after Monke is killed, and will spawn for around 18-20 turns on Hard Mode.

4 enemies in this chapter carry Elixirs, one of them being Monke and 3 carry vulneraries