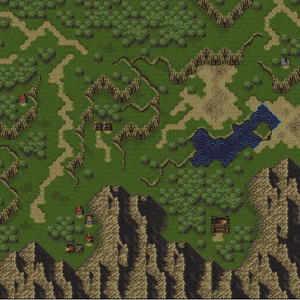 Diarmuid (automatically at start if Nanna is alive)

Chapter script
[view]
“By the time Leif had finished the last of the fighting in Leonster and departed for Alster, the city had already fallen to the Isaachian Liberation Army led by Lord Seliph. However, the head of House Friege, King Bloom, had escaped to Conote. In the now-liberated Alster, Leif finally met his cousin, a man who would be his friend and ally for the rest of his days: the "Scion of Light" and Lord of House Chalphy, Seliph...”
—Opening Narration

The Liberation Wars is Chapter 21 of Fire Emblem: Thracia 776.

The chapter features a band of Thracian Dragon Knights and a large assortment of ballista, including the highly unusual Poison Arch. As their name suggests, they poison any unit who gets hit by their shots, though they are less accurate and not particularly powerful by this point. Mounted reinforcements will flood in from the right side early in the chapter, so it may be best to wait until you have defeated all of them before leaving the starting area. The ballistae will make moving anywhere dangerous and the Dragon Knights in the south will stay where they are if you do not move far. There is no reward for finishing this chapter quickly, so you can afford to be as careful as you like. The only other danger is the Sleep staff using Priest next to the boss. You can silence him immediately, but if you want his staff you will need to put him to sleep or use Tina's Thief staff.

Once the reinforcements are taken care of, you can start probing until the Dragon Knights attack. They are all equipped with Horseslayers, so be very careful engaging them with mounted units. As usual, wind magic and bows will kill them handily. After they are gone, you can deal with the ballistae. If you intend to drain them, remember that Diarmuid also has the Charm ability. Between him, Nanna, and a King Sword holder, Leif should be nearly untouchable. The only other enemies to worry about are the Armor Knights, who should be relatively easy at this point. They are equipped with both Hammers and Battle Axes, so they may be worth capturing.

When approaching the boss, it is easiest to drain the ballistae from behind the cliff on the left side of the fortress. Be very careful not to enter into the boss' range while doing so; his Blizzard tome will leave your units asleep and unable to dodge anything. Once they are gone, you can drain his tome much more safely. DO NOT USE LEIF FOR THIS. If Leif falls asleep and you are unable to fix him with a Restore staff, you will not be able to seize the fortress to complete the chapter and will have to restart. Once you have depleted his tome and killed the Armor Knights, the boss will fall relatively easily due to his low defense. If you have a Thief with a build of 11 or higher, you can steal his Tornado tome and beat him without a fight.

If players are not looking to play this chapter at all, if you have 2 (or preferably 3) Warp uses left, you can use your Warp users (Both Sara and Safy should be able to use Warp by now, even if you have gone B route, you can field Lara to dance for them) and Tina, with 11 magic or higher, to do the following:

Tina is of critical importance in chapter 21x and can help trivialize chapter 22 if she has a reasonable magic stat. The only item worth stealing here is a Sleep staff (which can only be stolen if Tina has acquired a substantial number of Magic level ups, anyway), so players might want to bench her if her fatigue is high coming into the mission,. If her fatigue rating is low, however, she can contribute to this chapter so long as she is used in moderation. Also, if you have not gotten any units captured, this is your very last chance to do so if you want to go to the gaiden chapter. Send a unit with low build and no weapons toward one of the Armor Knights or Dragon Knights, but make sure they are not carrying anything valuable.