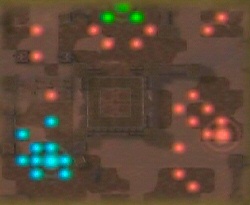 Chapter script
[view]
“The history of Tellius is a history of warfare, or so the troubadours sing. It is a history of unending conflict between the beorc and the laguz, a history penned in blood and scarred by mistrust. The beorc fight with the weapons of man--the sword, the axe, the lance, and the magic arts... while the laguz, able to transform into beast, bird, and dragon, are weapons unto themselves. Both were created equally by the goddess, but neither race has ever accepted the other. The heron prince Rafiel, the wolf queen of Hatari, Nailah, and her vassal, Volug. Is the Dawn Brigade's meeting with these three laguz chance...or a sign of things to come? Micaiah can only wonder.”
—Opening Narration

The Lost Heir is Chapter 5 of Part 1 in Fire Emblem: Radiant Dawn. Jill, Zihark and Tauroneo are NPCs and cannot be recruited, but if they die, you fail the chapter. This means you have to make sure to heal them with Laura and try to kill enemies before they get chance to kill Jill or Zihark.

In this chapter (on easy mode) if preferred, you can healer abuse your characters, by killing all of the enemies except for the boss and a healer, and have your units constantly attack them with weak bronze weapons. If one of your units can double attack the healer, then have that unit rescue another unit, this will cut that unit's skill and speed making him/her only able to attack once and have a lower chance of hitting the priest. Repeat this until you run out of weak weapons, or if all of your units are really strong and can kill the priest even when they have someone rescued.

As for the boss, have a unit equip with a 1 range weapon stand where the boss can hit him/her, but he/she can't counterattack (if preferred), and let the boss constantly attack that unit. If that unit gets hit, then heal him/her with Laura. Repeat this until the boss runs out of weapons, then just put him out of his misery.