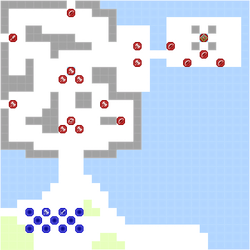 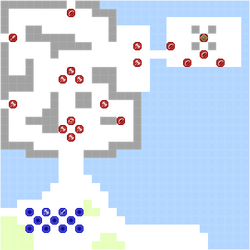 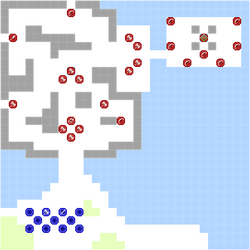 卓上の鬼神, Demon of the Table

Chapter script
[view]
“Having crushed the Alliance's army and captured the Great Bridge of Myrddin, the Imperial army prepares to attack Derdriu―the Alliance's base of operations.”
—Opening narration

The Master Tactician is the fourteenth chapter of the Crimson Flower route of Fire Emblem: Three Houses.

The week of the invasion of Derdriu, Edelgard recounts the story of the 10 Elites and the Relics. She explains that the Relics were created by mankind, only to be collected by Seiros after she manipulated the people of the world and killed the Liberation King Nemesis. According to her, the age-old claim that Nemesis was corrupted by his power is a lie and that the true conflict was a relatively mundane dispute that erupted into war. After defeating Nemesis, the Immaculate One and her family then took control of Fódlan with the aid of Edelgard's distant ancestor, the first emperor of Adrestia. Meanwhile, Claude and the Almyran general Nader lament the current state of affairs and the incoming battle with the Empire. The Imperial forces engage Claude in battle, and emerge victorious; Nader is driven off, Derdriu is brought under Imperial control, and Claude is spared or executed at the player's discretion. If Claude is spared, he approaches Byleth and Edelgard to explain he is leaving Fódlan. He asks Edelgard to show mercy to the Alliance and his former classmates and reveals that he has arranged for control of Alliance territory and resources to transfer to Edelgard. If Claude is killed, Edelgard theorizes that he arranged the battle so that the war between Adrestia and Leicester would come to an end with a minimal amount of bloodshed no matter the outcome. Either way, the Empire celebrates their victory and returns to the monastery to prepare for battle against Faerghus.

If Lysithea was not recruited beforehand, she will appear as an enemy here. Defeating her will give a prompt whether to persuade or kill her. Choosing to spare Lysithea will result in her joining at the end of the chapter.

Recruiting Lysithea can result in using dark spikes for future battles on the Crimson Flower route.