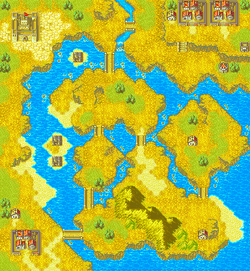 Chapter script
[view]
“After defending Ostia from Narcian, Roy braced himself for further attacks from Bern. However, Bern's aggression towards Lycia suddenly ceased altogether, as if to mock Roy's caution. Bern was also maintaining a neutral position regarding the peace offer from Etruria. Bern's sudden lack of activity could only be decribed as eerie. With Hector gone, Eliwood was the only remaining power in Lycia. Eliwood summoned the various marquises to Pherae to discuss Lycia's future plans. It was decided that Eliwood would be the new leader of the Lycia Alliance. A new Lycia Alliance Army was also established. This new force's purpose was not to take the offensive against Bern, but rather to remain in Lycia and take a defensive stance. For his victory in Ostia, Roy was chosen to lead the new Lycia Alliance Army. Slowly, the people of Lycia started to brighten up. Business was recovering, and people's attitudes were improving. The worst seemed to be behind them...However, around that time, Etruria called for Lycia's assistance in ridding the Western Isles of the outlaws terrorizing the area. The people of Lycia expressed their discontent at sending their only standing force all the way to the Western Isles, but since Lycia was still under Etrurian protection, they had no choice but to oblige. Thus, Roy led the Lycia Alliance Army through Etruria and on to the Western Isles. The Western Isles was the name of the archipelago off the western coast of Elibe. Mostly colonies of Etruria, the Western Isles were rich with minerals and natural resources. With mining being a major industry, various rogue groups had traveled to the Isles, hoping to loot the mines and sell the minerals for themselves. Therefore, the islands' people spent their days in constant fear of bandit attacks. Roy's mission was to rid the isles of these brigands.”
—Opening Narration

The player arrives on the Western Isles to deal with the banditry on behalf of the Etrurian government. In this chapter, Noah can recruit Fir and Sue can recruit Sin. There are two villages in the Northeast of the map. If you visit the village closest to the castle or neither village, the player will go to chapter 10A and receive a Killer Bow; if you visit the other village in the northeast, you go to chapter 10B and receive a Restore staff.

This is a Fog of War map. Chad or Astolfo are smart choices because they can see extra squares. The bandits receive reinforcements from forts at sea. Both Shin and Fir are initially hidden by the fog at the top-middle area of the map, to the right of the fort.

The boss is Scott, a Level 3 Berserker. Scott's high critical hit rate when wielding the Killer Axe would put many units in danger (unless the attacker has high Luck or Arena Abused to a promoted Level 20); therefore, it is best to use ranged attacks to lower the risk of a critical hit. Scott wields a Killer Axe and a Hand Axe, so he can attack from afar, but he is less dangerous at range.

You may want to split your units if you want to get to the south village; if you do so, make sure to keep a thief and at least one healer with each group. Many players prefer to take the route that goes to chapter 10A because Gonzales comes at a lower level but with identical stats and higher weapon rank, and because Echidna is often preferred over Bartre. Arena is also present in chapter 11A.