The Nest of Vice

The Nest of Evil 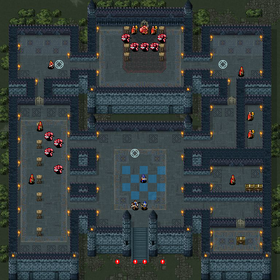 Rickard (if not recruited in Chapter 5: speak with Julian)
Frey and Norne (Automatically from Turn 3, exclusive in New Mystery of the Emblem)
Samuel (Enemy, talk with Ogma or Caeda)

Chapter script
[view]
“Grust has been liberated. All that remains is Olbern Keep, where General Lang remains barricaded. Lang used his influence to steal belongings, daughters, and lives from the people of Grust. Was there ever a man as cruel as he is? “I cannot forgive him. I shall take him down without fail!” Prince Marth raised his sword to the skies and ordered firmly: “Altean knights, charge!”
—Opening Narration, New Mystery
“Grunia has been liberated. All that remains is Olbern Castle, held guard by the commander of the occupation army, General Lang. Lang used his position to steal possessions from the Grunian citizens, to steal young girls, and to steal lives. Historically, has there been a man crueller than him? "He cannot be allowed to live. I will definitely defeat him!" Prince Marth raised his sword towrads the skies and shouted out an order. "Aritian knights, charge!!"”
—Opening Narration, Mystery of the Emblem

The Nest of Vice is Chapter 6 in Fire Emblem: Mystery of the Emblem and its remake.

Reinforcements come from the bottom of the stairs at the castle entrance.

In The Nest of Vice three Starsphere Shards can be obtained. Cancer is obtained by defeating Lang. Libra is obtained by opening the upper right chest. Aquarius is held by Samuel (disguised as Navarre), so he keeps it when he is recruited, and he drops it if he is defeated.

In addition to the squadron of Knights to your west, reinforcements will flood the map from the entrance near your starting point. Immediately head northeast while have Julian/Marth/any unit with a Chest Key to loot the chests on the map. The Rescue staff could be useful to whisk them safely after obtaining the treasures in the chests, but not necessary.  Leave one or two units on the chokepoint to stop the enemy units from overwhelming yours.

Once you opened the eastern door, be prepared for Samuel to head towards said open door from his starting position. Leave Caeda or Ogma out of his range until they could reach and recruit him.

When in the throne room, slowly bait out Lang’s Knights until he is alone, and take him out with an armor-effective weapon or magic. You can either take your time clearing out the reinforcements on the map, or immediately end the chapter by seizing the throne. 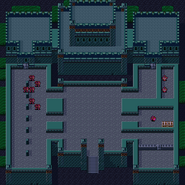