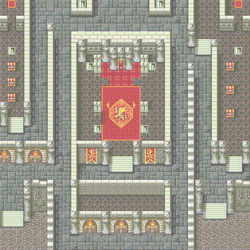 Chapter script
[view]
“After obtaining the Binding Blade, Roy directed his troops towards Bern's capital where King Zephiel was waiting. Inside the castle, Zephiel awaited with his personal guards at hand. Roy prepared to charge the castle to end this war, and to bring peace to Elibe again.”
—Opening Narration

The Neverending Dream (見果てぬ夢 Mihatenu yume) is Chapter 22 and the final chapter of Fire Emblem: The Binding Blade (unless the player obtains all of the sacred weapons).

The battle is inside Bern's castle. The allies are divided into two groups, each one on the bottom right and left part of the map.

To reach Zephiel, who is locked inside on the center of the map, it's necessary to activate two switches on the uppermost right and left corners by defeating the enemies who protect them, and ordering an ally to end their turn above it, or having a mounted unit perform an action over it. These units can now move away from the spot and converge on the throne room.

Activating both switched won't open the door immediately, so Roy must end his turn in front of the central door (the Binding Blade is not required, it can even be absent from Roy's inventory). After a conversation between Roy and Zephiel, the door will open, revealing a guard of Heroes, Druids, a Sniper and War Dragons.

Let the enemies approach you by ending your turn, positioning your allies to weather the attacks from the two Heroes (Silver Sword and Lancereaver equipped). Then, defeat the two Heroes (if you haven't already in a counterattack) and go after the two War Dragons (preferably with a Divine Weapon or a Wyrmslayer from one of the chests in the eastern room), Druids and the Sniper.

Alternatively, you could have Roy move in front of the door first and swarm the enemies, though it is best to stay out of the Manakete's ranges should you do so (unless you have an S-ranked magic tome user on standby with lots of Boots used on them from the chapter 21 secret shop).

Have your units end your turn on top of the stairs and slowly move your units towards the King. Your greatest units should face Zephiel, with durable units such as Generals or high Evade units such as Swordmasters equipped with the strongest weapons available being best for defeating Zephiel.

Zephiel holds a Hero Crest that can be stolen.