The Palace of Evil

The Palace of Evil links here, you might be looking for Manster Castle.

The Palace of Evil 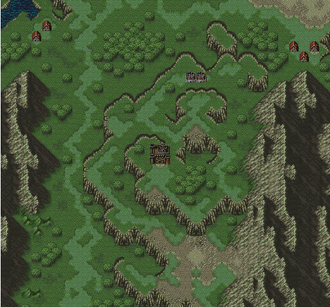 Saias (automatically at start, leaves at the end of chapter if Ced is recruted)
Ced (NPC, talk with Leif)

Chapter script
[view]
“Years ago, it was Raydrik's betrayal at the River Thracia that doomed Manster. Mere months later, Raydrik would betray Thracia to the Empire, allowing them to wrest control of North Thracia from Travant. For betraying Manster to Thracia, and then betraying Thracia to the Empire, Raydrik was dubbed the "Twofold Traitor." Now, having crossed the same river where his grandfather had met his end, Leif approached Raydrik's stronghold, Castle Manster. There, emboldened by news of Leif's victory, the citizens seized the opportunity to flee. However, they were caught in the crossfire of two forces: the Magi, led by Ced, who were trying to defend the civilians, and the Knights of Manster, who were determined to stop them. The region had become a war zone, and the fighting grew worse with each day...”
—Opening Narration

The Palace of Evil is Chapter 23 of Fire Emblem: Thracia 776.

Compared to the last one, this chapter is easy enough. It begins with Saias now under your control trying to escort the children down the mountain whilst being pursued by knights. It can be helpful to rescue the last of the child units with Saias on the first turn since she tends to lag behind, but it isn't necessary. If you plan to recruit Ced, you can leave the children to die. They are required to be alive to recruit Saias, but if you recruit Ced, they aren't necessary.

Interestingly, you cannot actually fight Alfan, the boss of the chapter, without going out of your way to. Only long range tomes can hurt him. If a unit gets near the castle (anywhere beyond where Saias starts), he will be automatically killed by Ced. If you do not want to deal with him or his long range Poison spell, you can move Saias down one space on the first turn and immediately trigger the event. Bear in mind though that the Dragon Knights who enter on the next turn will attack immediately if you do this, which is very dangerous for Saias and the children.

Your first concern will be dealing with the two Bishops near the castle wielding Sleep staves. They can be silenced relatively easily if you still have the staves available but can be quite the nuisance if you don't. Saias should start with the necessary staves and magic stat to stop them, and since you can take both of their staves before finishing the chapter there is very little reason not to spend the staff uses. You can also send a unit to the northeast to visit the houses before the Thief starts destroying them on turn 3. If you're already well stocked on Vulneraries, Holy Waters, and Physic staves though it may be best to just ignore them.

If you want to deal with the enemy knights quickly, you can opt to send a flyer over to the left side of the mountain immediately (be careful of the Bow Knights' and poisoned ballistae's range) carrying a tough land unit to hold the choke point. Otherwise you can rush your units up the mountain by land and fight them with your full army. This is also the last outdoor map, so feel free to use Dean's Dragon Lance to the breaking point since it will become useless after this chapter.

On turn 2 a group of Dragon Knights will arrive from the right side. They will hold their positions so long as Alphan remains in the castle, but will still attack anyone who gets in their range. As usual they are all armed with Horseslayers so be careful with your mounted units. If you go long enough without getting Alfan killed they will eventually leave on their own, but you can choose to bait them with a good foot unit for EXP if you want. Also be careful of the Great Knights and Duke Knights spawning from the forts from turn 3.

The most annoying reinforcements are the Dark Mages spawning randomly in set places peppered throughout the map. The area where the children start is the only place where they cannot spawn, so keep particularly fragile units there to minimize risks. They're not that strong but they all hold Yotsmungand tomes so be prepared for a few units to get poisoned. They will stop spawning around turn 10. If you want to avoid unnecessary risk, you may want to wait until they have stopped arriving before approaching the castle.

Once you've taken care of the ballistae, reinforcements, and knights, the chapter is more or less done. Make sure you've had Leif talk to Saias and then decide who you want to recruit. Talking to Ced will recruit him while ending the chapter without talking to him will recruit Saias. Ced is probably the better choice given his Forsety tome, A rank in staves, and high stats, but Saias does at least have three leadership stars to his one. If you do want to recruit Saias instead, just use a larger unit to rescue Ced to get him out of the way and have Leif seize the castle. If you choose to recruit Ced, be sure to trade Saias' staves over to someone else before ending the chapter so you can keep them.