The Path Through the Ocean

The Path Through the Ocean 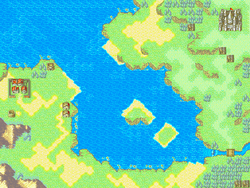 Chapter script
[view]
“After Roy captured Aquleia, other Etrurian powers gradually began to change their views and express their discontent for the Revolutionaries. Driven away from their palace, Roartz and Arcard fled to Ilia, which was still under Bern's control. Ilia, also known as the Frozen Highlands, was a harsh land with short summers and long winters. With little arable land, the nation's main source of income was to send out mercenary knights to fight for pay. Etruria joined forces with the Lycia Alliance Army to form a joint force under the name of the Etrurian Army, with Roy as its commander. Their first mission was to enter Ilia and finish off the remaining Revolutionaries. Once that was done, they would proceed to launch direct attacks on Bern. With the powerful backing of the Elimine Church, Roy had the populace on his side. However, Roy had to face the freezing cold of Ilia, as well as Bern's elite troops under General Murdock, the leader of the Three Dragon Lords. In addition, many of the powerful Ilian mercenary knights had submitted to Bern's side. As a start, Roy headed for Castle Raemy, located on the Ilian border.”
—Opening Narration

The Path Through the Ocean (海の道 Umi no michi) is Chapter 17A of Fire Emblem: The Binding Blade if you take the Ilian route (which happens if by the end of chapter 16, the experience points gained by Shanna and Thea were more than that of Sue and Sin; even if Shanna and Thea die before this chapter, it only matters how much exp they had before they died).