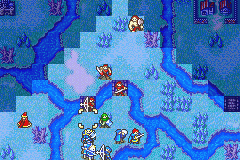 Chapter script
[view]
“The dying words of Lord Helman stun Eliwood beyond belief. 'Darin, the marquess of Laus, knows all...' Despite the pain it brings, Eliwood takes this newfound knowledge to heart and sets out for Laus once again. On the way to Laus, he travels through a Caelin village. Eliwood and his party decide to rest there for the night.”
—Opening Narration

The Peddler Merlinus is Chapter 13x in Fire Emblem: The Blazing Blade. To reach this stage you must visit the north-western village in chapter 13, In Search of Truth.

While resting on the way to Caelin, Hector and Eliwood hear a scream in the dark. Merlinus, a simple merchant, appears to be chased by bandits. The two lords quickly decide to help him. When the bandits are dealt with, Merlinus expresses his gratitude and is overjoyed to be invited to travel with the lords and manage the party's items.

As the enemies encountered here are more plentiful and a bit stronger than anything previously encountered, it is best to just stick near Merlinus and block off the bridges with some sturdier units, while keeping the characters you dont want to train in the centre. Since some sword users will come from the north, it is best to place either Eliwood, Guy or Lowen there. Apart from that, everyone except Rebecca, Serra and Matthew can be used for this. For the village in the northeast, Marcus is a convienient fit, because he will be able to get there quickly, and not take a lot of damage in return. If he has been trained sufficiently, Lowen can also do it quite well. If everything has been done correctly, the chapter should be pretty easy. If you don't want to get surprised, you can also use the torch from the last chapter, though it is not really neccesary.