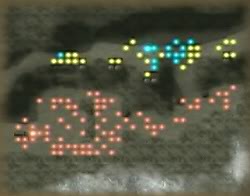 Rout a certain number of enemies

Apostle Sanaki's army, with Ike at its head, wins a great victory over Daein at Oribes Bridge. However, Apostle Sanaki elects not to pursue the retreating Daein forces. Instead, she petitions King Pelleas for permission to pass through Daein. After waiting for several days, she receives no reply, and Sanaki reluctantly orders a march. Avoiding the heart of Daein, the army skirts along the mountains and makes its way south.

The Price is Chapter 3-12 of Fire Emblem: Radiant Dawn. During this chapter, we take control of the Dawn Brigade again. The Daein Army is located on top of a cliff with throwing rocks, two ledges and a hallway. The Apostle's Army is located at the bottom of the cliff. The objective of the chapter is to eliminate 30 enemies in Easy Mode or 40 in Normal and Hard Modes.

Sigrun, Tanith and Kieran appear in this chapter as enemy combatants, and will be equipped with computer-chosen weapons if these characters were equipped with nothing when last used.

The player should begin by moving Tauroneo to the right, where Micaiah and company deploy in the map while moving one or two weaker units to the left where Tauroneo originally deployed in. Then, the player should form a straight line of defense on the slope while using Physics and other staffs to heal any injured allies. The weaker units sent that have been sent to the left should attack incoming Pegasi.